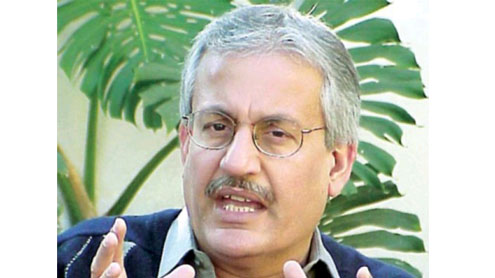 ISLAMABAD: The government achieved a major breakthrough on Wednesday in its efforts to redefine rules of engagements with the US when it succeeded to get the PML-N back to the Parliamentary Committee on National Security (PCNS).

The prime minister also thanked the PML-N president for his party’s effective role in a meeting of parliamentary leaders on March 29 that was convened to finalise recommendations regarding new rules of engagement with the US. The meeting was also attended by army chief Gen Ashfaq Kayani and ISI DG Lt Gen Zaheerul Islam.Meanwhile, the PCNS showed its inability to present the amended draft of recommendations for relations with the US in joint sitting of parliament today (Thursday).

Committee Chairman Mian Raza Rabbani acknowledged that it would not be able to present the amended recommendations today.Rabbani told the media after a committee meeting on Wednesday that any timeframe for completion of task assigned to PCNS could not be given.Parliamentary sources said that today’s joint session would be a “futile practice” because nothing pertaining to the foreign policy would come up in the discussion. The “most controversial” issue of resumption of NATO supply was blocking the way to evolve consensus for recommendations on relations with the US, the sources said.

Earlier, the committee presented its recommendations on the first day of the joint session. The recommendations had been finalised four months after the committee was given the task in the wake of NATO air strikes at Salala checkpost.The PML-N boycotted the committee’s meeting on Wednesday in protest against a hike in fuel prices. The PML-N had also certain reservations over some of the clauses of the original draft. Rabbani appealed to the PML-N to attend committee meetings in order to finalise the amended draft of recommendations. He said the committee would wait for the PML-N’s opinion until “the last moment”.

Rabbani said the committee was working without any pressure. He said it was the national responsibility of parliament to finalise recommendations for new rules of business with the US.The ANP’s Afrasiab Khattak, PML-Q’s Mushahid Hussain Syed, PPP-Sherpao’s Aftab Khan Sherpao and JUI-F chief Fazlur Rehman attended the meeting. – Dailytimes