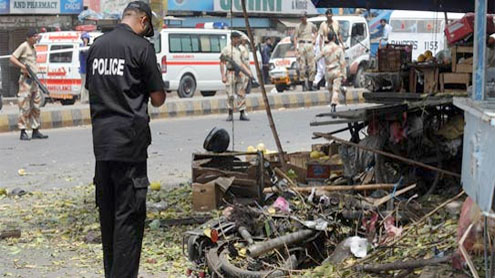 KARACHI: At least three people lost their lives while 13 others were injured in Karachi as a bomb blast ripped through the city’s Malir Halt area on Thursday, Media reported.

Security sources confirmed that the blast was a suicide attack on a convoy of police vehicles.“It was a suicide attack,” police official Tahir Naveed told AFP.“The attacker was killed in the blast and the body in hospital is suspected to be his,” he added.The apparent target of the bombing, Malir police chief Rao Anwar, was unharmed.

“The attack was against me. I was moving with my squad in Malir Halt district when the explosion took place. I am unhurt, but some of my men have been injured,” Rao Anwar, a senior police official, told AFP.Anwar claims to have been threatened for a month by “unknown terrorists”.“At least four people are dead and 13 others were injured,” police surgeon Hamid Parhyar told AFP.

All of the dead were men and police suspect one of the bodies may be the bomber. Two teenagers were among the wounded.No group has claimed responsibility for the attack.According to reports, the suicide attacker rammed his motorbike into SSP Rao Anwar’s vehicle before he blew himself up.The area was cordoned off while rescue-workers and a large contingent of security personnel surrounded the area.The wounded were transferred to the emergency unit at Jinnah hospital where sources said that some of the injured were in critical condition. – Dawn