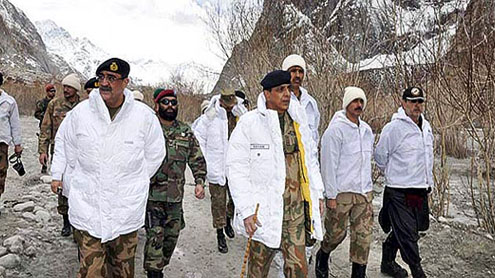 RAWALPINDI: Rescue workers used bulldozers on Sunday to dig through snow, boulders and slush in an increasingly desperate search for 135 people buried a day earlier by a massive avalanche that engulfed a military complex at the entrance to the Siachen glacier.

Army chief Gen Ashfaq Parvez Kayani visited the place to supervise the rescue operation as hopes of finding any survivors faded.Gen Kayani said during his visit that the army had mobilised all available resources with the help of the air force to carry out a full-scale rescue operation. He praised the morale and efforts of troops who were braving the harsh weather and inhospitable terrain.The chief of the army staff instructed the commanders to optimally utilise all resources at their disposal and leave no stone unturned to reach the entrapped personnel.

He said efforts were under way to acquire latest technical equipment for the rescue.The army chief said an avalanche of such a magnitude was unprecedented in the 20 years of the battalion headquarters’ existence at Gayari.He said the calamity should not affect the morale of the troops defending the motherland at the highest battlefield. The army had always risen to the occasion and would come through this challenge as well, he said.FCNA Commander Maj-Gen Ikramul Haq apprised the COAS about the details of the rescue operation.

More than 36 hours after a wall of snow crashed into the remote army camp high up in the mountains, rescuers were yet to recover any survivors or bodies.The camp was engulfed between 5am and 6am on Saturday — perhaps when some were sleeping — by a mass of snow, stones, mud and slush more than 1,000-metre wide and 25-metre high, the military said in a statement.About 180 military personnel and 60 civilian rescuers were braving freezing temperatures at the inhospitable site close to the de facto border with India, in an area known as the world’s highest battlefield, it said.

Those missing from the camp include 124 soldiers from the 6th Northern Light Infantry battalion and 11 civilian contractors.“There is no hope,” mountaineering expert Col Sher Khan told AFP. “You can survive only in the first 5-10 minutes.”“It’s a huge, huge avalanche,” a military officer said, adding rescue work would take several days.Specially trained search-and-rescue teams of army engineers equipped with the latest locating gadgets and heavy machinery had arrived, joining rescue units aided by sniffer dogs and helicopters, the military statement said. Some of the equipment was flown in on military aircraft.

“Adequate medical staff has been made available for the treatment of injured persons in forward field hospitals,” it added.A tailor and two hairdressers were among the civilians missing.Army spokesman Maj-Gen Athar Abbas said it was unclear whether any of the people who were buried were still alive.“Miracles have been seen and trapped people were rescued after days… so the nation shall pray for the trapped soldiers,” he said while talking to a TV channel.

The spokesman said the headquarters that was buried was located in an area previously believed to be safe. At an altitude of around 4,500 meters, it is the main gateway through which troops and supplies pass on their way to more remote outposts.It is situated in a valley between two high mountains, close to a military hospital, according to an officer who was stationed there in 2003.More soldiers have died from the weather than in combat on the glacier, which was uninhabited before troops moved there. – Dawn