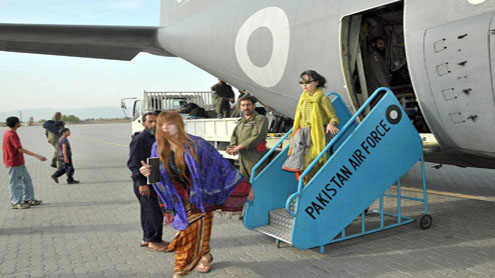 RAWALPINDI: A Pakistan Air Force (PAF) plane carrying 120 foreign tourists and mountaineers, who were stranded in different areas of Gilgit-Baltistan (GB) owing to law and order situation and inclement weather, arrived at Chaklala Airbase here from Gilgit on Sunday.

The foreigners included 78 Japanese, three Americans, three Canadians and a number of Croatians, Norwegians, Chinese and Thai nationals.As many as 154 tourists, most of the Japanese nationals, were stuck in Karimabad near Hunza while others were stranded in Gilgit, and Skardu areas.

All the tourists and mountaineers were taken to Gilgit by road and then brought to Islamabad onboard a PAF C-130 aircraft.Talking to media persons at PAF Airbase Chaklala, the tourists, mainly elderly men and women, expressed happiness on their safe arrival in Islamabad.They were also satisfied and pleased with the arrangements made by the authorities in Gilgit, especially the Pakistan Air Force.After a brief stay here, the foreign nationals will depart for their respective countries. – Brecorder