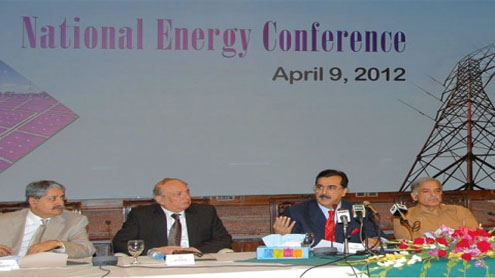 LAHORE: Nothing new has emerged form the national energy moot as the federal government has come up with the same old measures it adopted during last couple of years in the name of energy conservation.After the Second National Energy Conference held at Chief Minister’s Secretariat here Monday.

Prime Minister Yousuf Raza Gilani announced five-day a week work in public departments, closure of all commercial sites by 8pm and some other measures to ‘conserve power’ throughout the country. The only mentionable exception was his announcement of doling out power outages equally among the provinces.The first energy conference was held in 2010 which had recommended a thrust on generating additional electricity apart from adopting the steps to conserve 2,000MW of power to overcome the electricity crisis. However the target by and large remained short of achievement.And the hurriedly called second conference, to a large extent, replicated the old steps. It was held in the background of an acute power shortage, reaching up to 6,000MW, wherein Punjab grouses, it was the major victim in terms of non-availability of electricity to its industrial and consumer sector.

After about five-hour long discussion at the conference, the prime minister announced its decisions to media in the presence of chief ministers Shahbaz Sharif (Punjab), Amir Haider Khan Hoti (Khyber Pakhtunkhwa), Qaim Ali Shah (Sindh); Federal Minister for Water and Power Syed Naveed Qamar, Finance Minister Abdul Hafeez Shekh, Minister for Petroleum and Gas Dr Asim Hussain, KP Governor Barrister Masood Kauser, Federal Minister Manzoor Ahmad Wattoo, MNA Khwja Muhammad Asif and others.Punjab chief minister welcomed the PM’s announcement of uniform load-shedding in all provinces saying it was a strong demand of the province.Unveiling the steps proposed at the conference for saving electricity, Premier Gilani said street lights at alternate polls will be put in vogue to save as much as 250MW electricity, closure of all commercial sites by 8pm would conserve 250MW and five-day a week work in the public departments would save 700MW.

Winter and summer adjustment of timing in the public offices will be done instead of forwarding clock by an hour, he added.He said non-supply of power to the billboards and neon-signs has also been decided apart from replacing the current bulbs with energy savers throughout the country. Keeping in view the equal sharing of load-shedding, the chief ministers will take all the stake holders of their respective province into confidence to work out plans for the implementation of other steps. He also announced to provide gas to four IPPs as well as to Kot Addu Power Plant to make them give output to their capacity.Terming power theft a major problem, the prime minister announced to carry out legislation at the provincial level to check this practice sternly and for stepping up action against the power stealers through special magistrates, the home department, DCOs and other relevant authorities at the provincial level.

He said new meters will be installed to check power theft. The PM said the conference has also decided to make Nepra stronger so that it could act as an effective body towards its responsibilities.Highlighting receivables towards the provinces under the head of electricity, Gilani welcomed Punjab whose chief minister had announced at the conference to discharge the liability of province to pay the circular debts. The PM desired the other provinces to follow the suit and pay the dues. He said federal government will also clear its electricity dues without further delay.Announcing an incentive for the poor consumers, the PM enhanced the subsidy slab for them from 50units to 100units in order to provide them some financial cushion to meet the expenses of other items of daily use.Reply to a question, CM Shahbaz Sharif expressed satisfaction with the decision of equal load-shedding and said the decision was not easy to take but the sagacity of the PM and the CMs and the ministers helped them reach consensus.

He said we four provinces are four brothers whose mirth and sorrows are common and the federation can stay on if they feel for each other. He said it was the same venue where NFC award was announced with consensus of all provinces – an achievement that even a dictator, Pervez Musharraf, could not achieve despite wielding the power of gun. Shahbaz said all the decisions were taken after long deliberations and obtaining input from the business community and other stake holders.Prime Minister Gilani in the conference while appreciating the performance of Punjab government with regard to closure of shops and business at fixed timings during load-shedding, said that Punjab consists of 100 million population and this province has always taken lead in implementing the decisions.

When a questioner expressed apprehension of any province going to the court of law against the decision of equal level of outages, as happened in case of gas distribution, the prime minister shrugged off this impression and said everyone came here with an open heart and everyone laid open his mind frankly on this serious issue which all them of wanted to settle with consensus and therefore there was no scope of agitating the matter before court as such. “We have to survive as a country,” he said adding, no one will face discrimination.The PM said the federal government will welcome the steps initiated by any province to overcome the power crisis.

To another question he said, the government is exploring every source of generating power including coal and wind besides talking the electricity import matter with Iran and India.To a question on the construction of Kalabagh Dam, the premier referred to the 18th constitutional amendment to make out a point that no dam could be constructed unless all the provinces agree to it. He said the process of constructing Basha-Diamir dam is underway and Kalabagh Dam could also be built if the provinces develop a consensus on it. He said dictator Pervez Musharraf had unchallenged powers yet he did not build Kalabagh Dam despite its announcement. He could have done it had he willed it, the PM added. – Nation