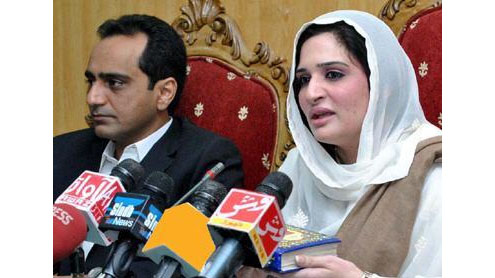 LAHORE: An additional district and sessions judge on Tuesday sought reply from the Garden Town SHO and the CCPO by April 18 on a petition filed by Ayesha Ahad, daughter of former MPA Ahad Malik, seeking court directions for registration of a FIR against Pakistan Muslim League-Nawaz MNA Hamza Shahbaz, Imran Yousaf and others for subjecting her to torture.

Earlier, the petitioner’s counsel Aftab Ahmad Bajwa arguing the case before the court submitted that Inspector Rizwan along other police officials raided the petitioner’s house on April 6 and subjected her to torture and threatened to kill her. The counsel alleged the police had taken the action at the behest of PML-N MNA Hamza Shahbaz and Imran Yousaf.He submitted that an application was moved against the accused for registration of a case but the police did not take any action.The counsel pleaded the court to issue directions for registration of a case against Hamza Shahbaz, Imran Yousaf and others. AD&SJ Safdar Bhatti adjourned the case until April 18.

Earlier, the petitioner’s counsel submitted before the court that a case was registered against the petitioner and others on January 19 under section 324, 341, 355, 148 and others of CrPC along various sections of Anti-Terrorism Act on charges of injuring and subjecting to torture Nafees Ahmad Khan, a school teacher, for using bad words against petitioner in a public meeting.

He said the petitioner challenged jurisdiction of ATC to hear case against him but the application was dismissed on March 29 by the ATC. The counsel contended that the petitioner was innocent and inclusion of ATC sections was not justified by facts of the case and the statements of witnesses. He pleaded the court to declare the order dated March 29 by the ATC illegal and be set aside. He also requested that the sections of ATA be expunged and the matter be forwarded to ordinary court for hearing. The court adjourning the matter barred the ATC from finalising the matter and directed law officer to seek instructions. – PT