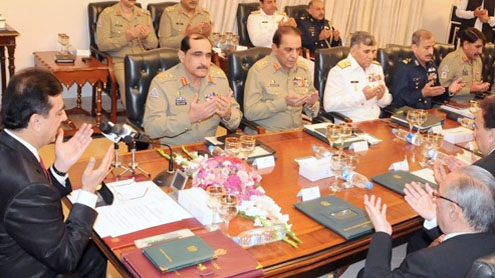 Defence Committee of the Cabinet

ISLAMABAD: The Defence Committee of the Cabinet (DCC) on Tuesday decided to appeal to the nation to observe the coming Friday, as Youm-e-Dua for the safety and well being ofPakistan Army soldiers and civilians.

Prime Minister Syed Yusuf Raza Gilani chaired the meeting of Defence Committee of the Cabinet (DCC) at Prime Minister House here. The meeting offered special prayer for the well being and safety of the Pakistan Army personnel and civilians trapped under snow in Gayari Sector.In the opening statement, the Prime Minister said that the DCC’s meeting convened to consider the recommendations of the Parliament that were finalized on Thursday, April 12.The Parliamentary review process was an unprecedented development and marks a new milestone in Pakistan’s progress along the path of democracy, the Prime Minister said. – APP

Inflation is here to stay

Inflation is here to stay