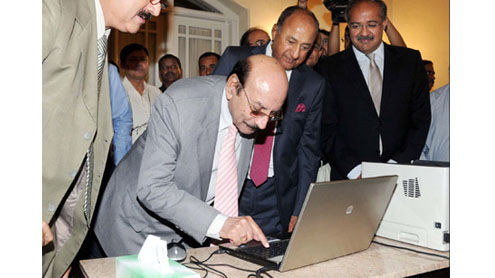 KARACHI: Sindh Chief Minister Syed Qaim Ali Shah has said that the agriculture is the backbone of our province’s economy and the Sindh government was doing a lot for progress and development of that sector in order to maximise the yield per acre for various crops.

This he said while performing computerised balloting of 6,000 tractors for farmers/growers of province at an impressive ceremony at the Chief Minister House. He said that it was our policy to provide maximum facilities to growers so as to equip them with latest trends and technologies for improvement in agriculture sector for achieving highest production in crops. Shah said that due to concerted efforts, the yield per acre had increased in the province by 29 percent, as more than 65 percent population depended directly or indirectly on agriculture.

The chief minister said that three years ago, Sindh had imported wheat but at present we were self-sufficient in edible items and we were also exporting some food items. Regarding increase of price for inputs like fertiliser, seed, etc, he said that due to increase of prices for inputs, diesel, transportation and shortage of electricity and gas, the price of fertiliser & seed had increased.Shah stressed upon investors, agriculturists and growers to encourage agro-based industries in the province, which was very essential for progress of agriculture in the province. He said that there were crisis and protests on shortages of water in the various parts of province but in the year 2010-11, there was water and rains in excess.

He further said that presently talks were ahead at secretary level with the federal government regarding share of water. Regarding shortage of Bardana, the chief minister said that due to late sowing in lower Sindh, the harvesting process had come to a late; keeping in view the expected heavy rains, harvesting process must be completed soon. Shah said that Sindh government, while keeping in view the recommended price of the federal government, had increased the price of wheat by Rs1050 per 40 kg.He further said that with regard to prices of fertilizer, seed and other items, the suggestions and views of the Sindh Chamber of Agriculture would be considered. He added that we would maximize procurement of wheat, for which food and agriculture departments were there to look after the interests of growers of Sindh.

Shah said that after decision of Sindh government, other provinces had also increased the price of wheat per 40 kg.Earlier, Sindh Agriculture Secretary Aijaz Ali Khan presented welcome address and highlighted the perspective of computerised balloting of the scheme of assistance to farmers on purchase of 6,000 wheel type tractors in Sindh province. – Dailytimes