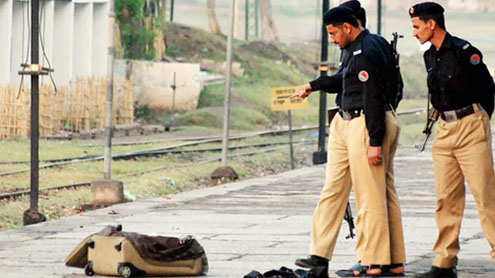 ATTOCK: A Peshawar-bound train escaped disaster when a 13kg bomb found on it was defused in Attock, hours after an explosion during its stopover at the Lahore station had left several people dead on the platform.

According to railway police, some passengers of the Awami Express coming from Karachi informed the security staff about an abandoned bag in coach 16 when train was about 20km from the Attock station at about 2.30am.The train had already been delayed because of Tuesday night’s bomb blast in Lahore that had terrified the passengers and alerted the police personnel deployed in it.

Railway police constables Mohammad Afzal and Mohammad Safdar checked the bag and found a remote-controlled bomb in it.Officials of railway police and other law-enforcement agencies, bomb disposal squad and Rescue 1122 rushed to the Attock city station and removed all people from the platform before the train’s arrival.When the train arrived at around 3am, all passengers were immediately asked to vacate it and the explosive device was defused by the bomb disposal squad, sources said. The bomb also had ball bearings, a battery and an antenna, they said.

After a detailed search of the bogies, the train was allowed to head for Peshawar about 5.30am.Railway police official Darul Ameen said a terrorism case was being registered against unknown people.The source said the investigators were comparing the types of the defused bomb and the one that had exploded in Lahore. – Dawn