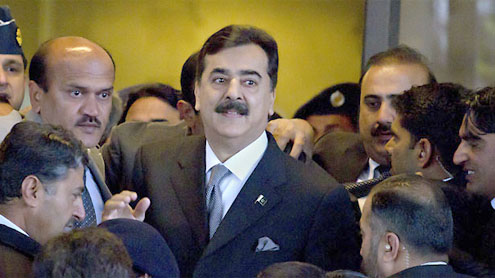 ISLAMABAD: Prime Minister Yousuf Raza Gilani on Thursday was convicted of contempt of court and sentenced until the rising of the court, Media reported.

A seven-judge bench of the court, headed by Justice Nasirul Mulk, announced the verdict in the contempt of court case.The premier was convicted and sentenced under Article 63 (1) (g) of the constitution.9:35 am: “For reasons to be recorded later, the prime minister is found guilty of contempt for wilfully flouting the direction of the Supreme Court,” said Justice Nasirul Mulk.

9:40 am: The sentencing lasted for 30 seconds.9:50 am: A visibly dejected prime minister, accompanied by his sons, after hearing the verdict shook hands with his team and members of the federal cabinet.10:11 am: A meeting of the federal cabinet will commence at 11:30. At 2:00pm, a meeting of allied parties will start at the president’s house.10: 13 am: Federal minister Firdous Ashiq Awan said that a petition would be filed in the court for a review of the verdict. She moreover said that further course of action would be decided once the detailed verdict is received.

10: 16 am: Gohar Khan, assistant to Aitzaz Ahsan, and a member of the prime minister’s legal team also said that a review petition would be filed.Politicians, lawyers and journalists (local and international) were also present in the court for the hearing.Government officials and dignitaries present at the court included Khyber Pakhtunkhwa Governor Masood Kausar, Defence Minister Ahmad Mukhtar, Presidential Spokesperson  Farhatullah Babar, political secretary to the party co-chairman Rukhsana Bangash and Attorney General Irfan Qadir. – Dawn