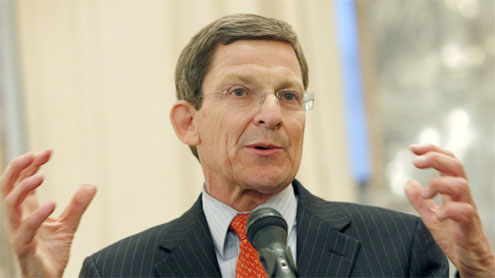 ISLAMABAD: Pakistan and the US will commence on Thursday negotiations to reset ties and hold consultations and coordinate positions on Afghan peace process.

A US delegation led by Special Envoy for Afghanistan and Pakistan Marc Grossman, which is in Islamabad for the sixth Pak-Afghan-US core group meeting, will hold talks at the Foreign Office with Foreign Secretary Jalil Abbas Jilani and his team.This being the first high-level delegation from Washington visiting Islamabad since completion of the protracted parliamentary review of knotty ties, it was evident that renewal of bilateral relationship will dominate the meeting, which customarily precedes the trilateral core group session.

Recent Kabul attacks linked to the Haqqani network are also likely to come up during the meeting with the US expected to clearly state its “concerns” despite having shown restraint in public comments for the sake of repairing damaged relations.A senior Pakistani official, talking to Dawn, said “all issues” would come up, but said it would be better to treat the interaction as the informal start of talks for defining the future of the relationship, which has been marred by deep mistrust and divergent interests, pending the approval of the yet to be finalised work plan for the dialogue.

The Defence Committee of the Cabinet (DCC) in its April 17 meeting decided to formulate a “work plan” for implementation of parliamentary proposals.While the work plan is still in the formative phase, the government went into a huddle late on Wednesday night, firming up its position for the parleys.“The meeting took stock of the recent developments in the region. They discussed matters related to Afghan peace and reconciliation and new terms of re-engagement with US/Nato/Isaf in accordance with recommendations of parliament,” a brief media note issued by the Prime Minister’s office said.

PM Gilani had at the last DCC meeting announced the key “policy parameters” for re-engagement with the US which included negotiations on new terms and conditions for resumption of the Ground Lines of Communication (more commonly referred to as Nato supply routes), joint counter-terrorism cooperation, greater inter-agency coordination, transparency in US diplomatic and intelligence footprint in Pakistan, strengthening of border security and non-use of Pakistan’s territory for attacks on other countries and expulsion of all foreign fighters from Pakistan’s territory. Demand for cessation of drone attacks had strangely missed the priority list.

The meeting of the core group of three countries will be held on April 27.“The meeting would review various issues of common interest, including the Afghan-led and Afghan-owned peace and reconciliation process, economic development, narcotics, return of Afghan refugees and regional connectivity,” Foreign Office spokesman Moazzam Khan said.