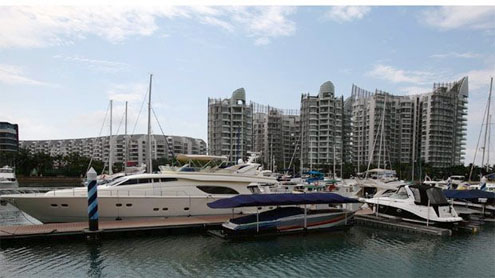 SINGAPORE: The newly wealthy in Asia think nothing of spending big money on a big boat for prestige and fun but the region’s nascent yachting class may have trouble finding a berth in overcrowded marinas.

Asia is home to less than 4 percent of the world’s 7,000 superyachts but interest has been taking off for the last five years and many buyers are young, executives from the luxury boat industry said at a conference in Singapore on Wednesday.“We had a guy turn up a few weeks ago in a Lamborghini and say ‘Look, my friend has just bought the same Lamborghini. What can we do different?’” Simon Turner, the Singapore-based director of yacht brokers Northrop and Johnson, told Reuters.

“So we got some boat brochures and he said ‘I’ll buy one’. It was done in five minutes. That’s a $10 million yacht.”As Western economies sputter, Asia has steamed along with growth and wealth creation. The 2011 Merrill Lynch-Capgemini World Wealth Report showed Asia has 3.3 million people with high net worth, just behind the 3.4 million in North America but ahead of the 3.1 million in Europe.It is a trend the yacht industry is keen to capture, along with Singapore, which is rebranding itself as a sophisticated haven for the rich with casinos, top shopping and four marinas that can accommodate boats of 25 meters (82 feet) and longer.

This week’s Asia-Pacific Superyacht Conference flows into the Singapore Yacht Show that runs from Friday to Sunday, when the ultra-affluent can peruse some of the world’s largest boats, check out a showcase of supercars, sip champagne in a VIP lounge and enjoy meals by Michelin-starred chef Pascal Aussignac.The biggest boat in the show, the 57-meter (187-foot) MY Montigne, is also for sale to anyone with a spare $21.8 million.The three-mast sailing yacht has six en-suite staterooms, a large saloon with a piano and “a state of the art audio-visual system throughout, as well as an extensive watersports toys list,” brokerage Simpson Marine says.

Hong Kong remains the biggest market for luxury boats in Asia but Thailand, China, Indonesia and Singapore are growing significantly, Jean-Jacques Lavigne, executive director of the Singapore Superyacht Association, told the conference.“We are all here in Asia for one reason — to serve the people who are mariners and make a lot of money,” he said. “The big fight is really in production boats, new ones.”Established boat builders and related firms are too focused on “gloom and doom in Europe” and not really ready for the shift to new markets and young, wealthy Asian buyers, he said.

“You’ve got to sell new stuff and change your way of thinking,” Lavigne told the delegates.Other challenges for the industry and sailors include overcrowded marinas in Hong Kong, Singapore and Thailand, the need for more infrastructure throughout Asia and regulatory uncertainties in countries like China and Indonesia.“It’s a question of how can we manage the growth and provide facilities. We have a massive shortage of crew and there’s very little training for them out here in Asia,” Turner said.

“Big yachts are owned by entrepreneurs and important business people so if they come to your country with their yacht, they want to see good service, facilities, assistance in a forward-looking country.”Asians value the same things in a luxury boat as Westerners – privacy, adventure, family time, lifestyle and a place to do business – but to varying degrees and with their own touches.

Space on deck is not that important to Asians, who prefer to spend time inside their boats, said Francesca Ragnetti, trade marketing manager at Italy’s Azimut Benetti Group, which now has offices in Shanghai and Hong Kong.“They ask for a karaoke room, for a mega-cinema room, things like this that they can enjoy with their friends,” she told Reuters. “And a disco or a spa.” – Arabnews