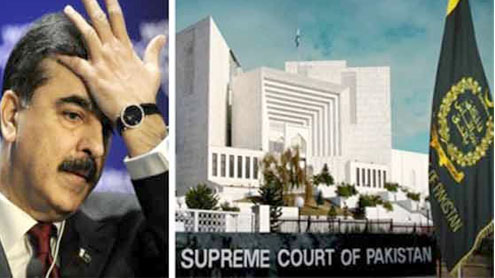 The Supreme Court would announce the judgment in Contempt of Court Matter regarding the implementation of judgment in NRO Case today.

A seven-judge bench headed by Justice Nasir-ul-Mulk on Tuesday had reserved its judgment in the contempt case initiated against Prime Minister Yousaf Raza Gilani for failing to act on the apex court’s directives to reopen graft cases against President Asif Ali Zardari.The court had asked Gilani’s counsel, Aitzaz Ahsan, to ensure that the premier is present in court when the verdict is announced on today (Thursday).Prime Minister Gilani has announced that he would be appearing before the court for hearing the judgment.

In this regard elaborate security arrangements are being made for proper court decorum and smooth functioning of the Supreme Court.Special security cameras have been installed in the court rooms as well as Public entry gates and reception areas of the Supreme Court of Pakistan.Entry in Court Room No. 4 would be restricted and allowed only on passes to be issued by the Additional Registrar to the petitioners, respondents and their learned counsel.

Entry into court building will be allowed after checking and searching of bags andpurses etc. No cell phone can be carried inside the courtroom.Meanwhile, Prime Minister Yousaf Raza Gilani Wednesday addressing a meeting of his cabinet said he would appear in Pakistan’s Supreme Court on Thursday for the verdict in a contempt of court case that could decide his fate.The government has always respected the judiciary and acted on its orders and will continue to do so, he said.

PM Gilani could face a six-month prison term and disqualification if he is convicted.Even after he was formally charged with contempt of court on February 13, PM Gilani insisted that he would rather be jailed than approach the Swiss authorities to reopen the cases against the President.The premier has said throughout the proceedings in the apex court that he had done nothing against the government’s rules of business.

It will be the third time that the prime minister will be appearing before the apex court.The federal cabinet meanwhile has expressed confidence in the leadership of Prime Minister Gilani.Meanwhile, Interior Minister Rehman Malik said that the whole cabinet will accompany Prime Minster Yousaf Raza Gilani in the court on Thursday. – Dunyanews