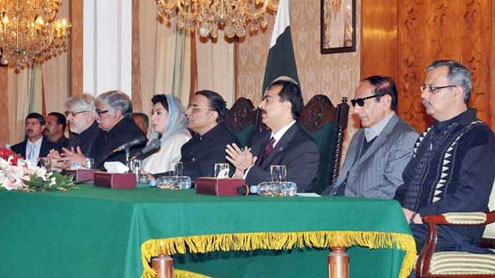 Islamabad: After the conviction of Prime Minister Syed Yusuf Raza Gilani, two separate meetings of coalition partners and senior leadership of PPP were held at the Aiwan-e-Sadar on Thursday to consider the aftermath of the Supreme Court verdict against the prime minister.

President Asif Ali Zardari and Prime Minister Syed Yousaf Raza Gilani presided over both the meetings, which expressed dismay that no dictator in the past had been punished for abrogation of the Constitution but an elected Prime Minister has been sentenced for upholding the constitution and supremacy of the parliament.