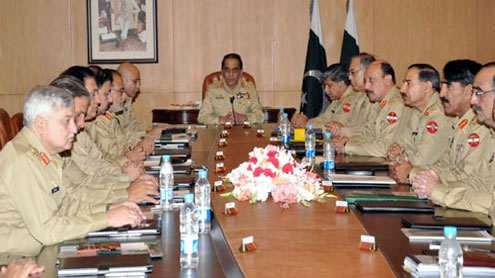 ISLAMABAD – Chief of Army Staff General Ashfaq Kayani on Friday appointed Major General Asim Bajwa as the new Director General of the Inter-Services Public Relations (ISPR) along with some other important appointments.

Major General Athar Abbas, the former ISPR DG is due to retire in June, 2012 and would be replaced by Major General Asim Bajwa. Bajwa was commissioned on March 16 1984 in the Punjab Regiment. He has commanded 34 Punjab Regiment and has been the commander of 111 Brigade. He has been chief of staff of a corps, instructor at Command and Staff Course, brigade major of Infantry Brigade and platoon commander at Pakistan Military Academy (PMA). He is a graduate of Command and Staff College Quetta, NDU Islamabad and Staff College Camberly (UK).