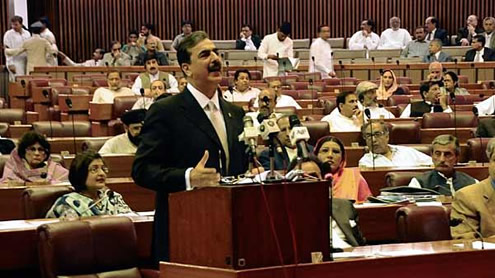 ISLAMABAD – Prime Minister Yousaf Raza Gilani took to the floor of the House on Friday, orating a fiery speech in which he said that irrespective of the decisions (of the courts), “an elected prime minister cannot not be removed without the due process”.

“I also want to tell Madam Speaker that you are not merely a post office. You also have to apply your own mind on disqualification,” he added. “But, if the parliament de-notifies me, I will be honored. This is up to the custodian of the House,” Gilani said. Gilani earlier exposed the hollow claims of PML-N of not allowing him to enter the House when he made an entry as well as a lengthy speech. In response to threats given by Leader of the Opposition Chaudhry Nisar Ali Khan the other day, Prime Minister Gilani challenged the opposition to bring a no confidence motion against him. Speaking in the National Assembly, Prime Minister Gilani said nobody could remove him from his office except the speaker. “Am I not an elected prime minister? Do I not represent 180 million people of Pakistan? Nobody can remove me from the office of the prime minister except you, Madam speaker. This is in the law and the constitution,” he said in his first address in the National Assembly after his conviction by the Supreme Court. Prime Minister Gilani received warm welcome upon his arrival in the House and loud desk thumping and standing ovation by the treasury forced three to four PML-N parliamentarians present in the House to leave.

Gilani lambasted the PML-N, its leadership and Leader of the Opposition Chaudhry Nisar Ali Khan, saying nobody could impose his decision or wish on us. “We are elected people and strived to uphold the constitution and respect of institutions … they cannot act like God. We have majority in both the Houses of the parliament. They (Nawaz, Shahbaz and Nisar) should respect others. I challenge them if they have courage, they should move a no confidence motion against me,” Gilani asserted. He questioned how they (PML-N parliamentarians and leaders) could not allow a unanimously elected prime minister in the House. “One brother (Shahbaz Sharif) does not accept the president, other (Nawaz Sharif) refuses to accept the prime minister. The entire PML-N does not accept Imran Khan’s Tehreek-e-Insaaf,” Gilani said.

He said just a day earlier, Nisar had wished him good-luck for the court verdict, but after conviction, they announced not to allow him in the House. He said anyone considering the PPP’s political reconciliation as its weakness lived in a fools’ paradise. Gilani said after Pervez Musharraf toppled Nawaz Sharif’s government in 1999, he had announced not to accept any such parliament lacking Benazir Bhutto or Nawaz Sharif. “We had condemned it at a time when people of their own party were silent. I had contended that it was unconstitutional step and thus unacceptable to me,” said the prime minister. He said they launched a movement and also supported the one initiated by Kalsoom Nawaz, but as both brothers left for abroad, the opposition alliance was shocked.

However, the Charter of Democracy was signed later thinking that democracy should not be derailed, adding that the PPP could have changed loyalties of the people if had desired so. “I would prefer to sit in opposition than to change loyalties of the people,” Gilani commented. “Musharraf had suggested the PML-Q to form an alliance with the PPP and establish its rule but we declined it … we supported them in Punjab. They formed coalition with us in federation. But later, the worst picture painted by their finance minister incurred huge loss to the country. They thought it would lead to fresh elections and they would stand victorious,” he recalled. The prime minister said the government had been maintaining coalition with all political parties, minor or major. “But they (PML-N) cannot do so even for a single day. They are too egoistic. We have accommodated them too by allocating funds worth billions of rupees,” he stated.

He claimed that the PML-N would have toppled the government in a second had it got a chance.
Defending his act of not writing letter to Swiss authorities for reopening graft cases against President Zardari, Prime Minister Gilani questioned: “What is my fault? What wrong have I committed? I have protected the constitution of the country.” He said the very parliament had passed the 18th, 19th and 20th amendments, but no one neither objected on presidential immunity nor even submitted any dissenting note. He said across the world, heads of states enjoyed immunity under Vienna Convention that also remained part of constitutions of 1956, 1962 and 1973, then why this immunity was not for the incumbent president. “I have been convicted neither on financial or moral corruption. I have been convicted just because of protecting the constitution,” Gilani commented.

“When we talk of judiciary, you support the parliament. When we talk of parliament, you side with the judiciary. First you should decide on which side you are? I want to tell that I am with parliament, which is the will of the people,” he commented. The prime minister said it was for the first time that people were congratulating on a conviction, because the government had taken a principled stance to protect the constitution, not to hide corruption. He advised the opposition to refrain from making tall claims as they could not stop him from entering the House as if they did not accept him as prime minister, he was at least member of the House. “Don’t treat me as prime minister but I am member of this august House. Yes, you should not accept me as member too if the speaker de-notifies me. But there is a process comprising appeal as well as speaker’s notice,” he added. – Pakistantoday