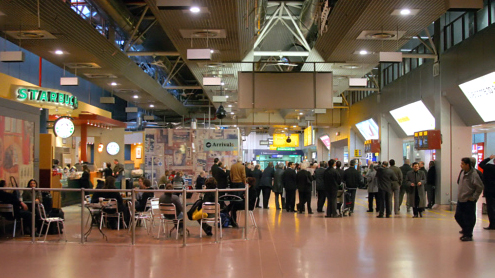 Long queues at Heathrow Airport passport control on Friday evening have cleared overnight, BAA confirms.But a spokeswoman said it was too early to tell whether the long wait for immigration checks at Terminal 5 would continue on Saturday.MPs had earlier demanded an explanation from the Immigration Minister Damian Green for the recent bout of delays.

A Border Force spokesman said: “We will not compromise border security but we aim to keep disruption to a minimum. “BAA, which owns Heathrow, wants the Home Office to “address the problem as a matter of urgency” and has called the recent queuing seen at airport immigration control as “unacceptable”.

Some of the recent queues reportedly meant passengers arriving from outside the EU had to wait up to three hours. Delays have been reported over the past month.Only three or four border staff were on duty for EU arrivals on Thursday and three for non-EU arriving passengers, according to the Evening Standard newspaper.A BAA spokeswoman said: “Immigration waiting times during peak periods at Heathrow recently have been unacceptable and we have called on the Home Office to address the problem as a matter of urgency.

“There isn’t a trade-off between strong border security and a good passenger experience – the Home Office should be delivering both.”Leo Lourdes flew into Heathrow on Friday night from Germany and described the situation at the airport as “madness”.

He added: “You’d get the PR announcements saying ‘we care about stringent immigration controls and we’re doing things thoroughly’ but when you get to the end of the queue you realise there’s actually empty boxes with no-one in them.”So it’s really not a case of them doing things thoroughly when there’s not staff there to do the job thoroughly. That’s more the issue.”

Home Affairs Select Committee chairman Keith Vaz has asked the immigration minister to appear before the committee to explain the situation.Mr Vaz said the issue was of “great concern”, the paper reported.

“Huge damage is done to our country’s reputation,” he said.

“The government has a choice either to increase the number of staff at the airports or to restart the suspension of the checks.

“This needs to be done irrespective of the Olympics. This is not an Olympics issue. It is about ensuring that Heathrow is a world-class airport every day of the year.” Responding to the most recent delays, a Border Force spokesman reiterated the response given during similar delays, most recently at Easter: “We will not compromise border security but we always aim to keep disruption to a minimum by using our staff flexibly to meet demand.” – BBC