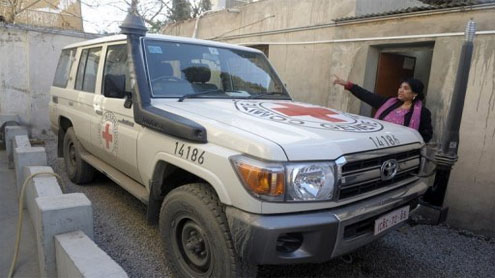 QUETTA: The body of a British Red Cross worker abducted in Balochistan was found beheaded on Sunday, with a note saying he was killed after his captors’ demands were not met.

The mutilated body of Khalil Rasjed Dale, 60, was dumped in a bag in an apple orchard on the outskirts of Quetta, almost four months after his abduction. A note claiming to be from the Tehreek-e-Taliban Pakistan was found with the body, senior local police official Tariq Manzoor said.The group said in the note that “our demands were not met (and) we have stuffed his (Dale’s) body in a bag after slaughtering him. We will soon release video of his beheading,” according to Manzoor. Dale, a British Muslim who had been managing a health programme in Quetta for almost a year, was abducted on January 5 by eight masked gunmen, who forced him from his car at gunpoint while he returned home from work.

A source close to the case said the captors had demanded a ransom of $30 million. The International Committee of the Red Cross “condemns in the strongest possible terms this barbaric act,” said Director-General Yves Daccord. “All of us at the ICRC and at the British Red Cross share the grief and outrage of Khalil’s family and friends.” “We are devastated,” Daccord said, adding that the aid worker — who had worked in Somalia, Afghanistan and Iraq for the ICRC — was a “trusted and very experienced Red Cross staff member”.British Foreign Secretary William Hague said London had tried tirelessly to secure Dale’s release. “This was a senseless and cruel act, targeting someone whose role was to help the people of Pakistan, and causing immeasurable pain to those who knew Mr Dale,” he said in a statement.

Riffat Hussain, a police surgeon at Bolan Medical College in Quetta, where the aid worker’s body was taken, said that Dale had been “decapitated”, but that doctors had “stitched” his head back on to his body. He is believed to have been killed some 12-14 hours before his body was discovered, the surgeon said, adding that some of his joints had been dislocated “because the body was forcibly stuffed into the bag”. Police official Manzoor said: “His body was found in a bag in an apple orchard on the outskirts of Quetta on Sunday morning.”The ICRC had announced a reduction of its activities in Pakistan just days before Dale’s abduction with the closure of three of its centres in the northwest.

But after Dale’s abduction, the organisation vowed to continue its work in the troubled country. In Balochistan, the ICRC mainly focuses on health programmes and supports several medical centres, including a hospital. Meanwhile, the Foreign Office also condemned the killing of the ICRC official.“We are deeply saddened to hear about the unfortunate death of Mr. Khalil Dale, an ICRC official, who was kidnapped from near Quetta last year,” said a foreign office statement. He said, “The Government of Pakistan condemns this barbaric act in the strongest terms and is determined to bring the perpetrators of this heinous crime to justice.”He said, “Pakistan is committed to combat terrorism and the death of Mr. Dale has only strengthened our resolve to eliminate this scourge. Our Prayers and thoughts are with the family and friends of Mr. Khalil Dale.” – PT