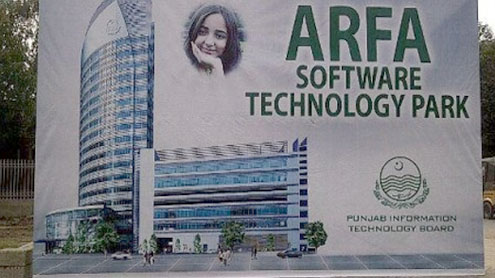 LAHORE: Different Memorandums of Understanding (MoUs) were signed between Punjab government and the world renowned IT companies for enhancing mutual cooperation in information technology sector.

The function held at Arfa Software Technology Park was attended by Punjab Chief Minister Muhammad Shahbaz Sharif, Chairman Planning & Development, Provincial Secretaries, Chairman Punjab Information Technology Board (PITB), representatives of IT companies and computer experts. MoUs were signed by Chairman PITB Dr. Umar Saif on behalf of Punjab government while Chief Executive Officers of IT companies.Under the MoUs, American company Microsoft will train students in internet based self-employment methods, Cisco will set up Cisco Network Academy while through Hawaway Company, besides infrastructure development of information and communication technology, various training facilities will also be provided in the province.

Similarly, through oracle, students will be provided training in oracle technology and certification facility. Teradata will establish the most modern development center in Arfa Software Technology Park which will result in generation of job opportunities to 200 persons. Trans world Company will provide fiber optic link at Arfa Software Park while through WATEEN, free of cost Wi-Fi internet facility will be provided to the students in educational institutions throughout the province. These agreements are aimed at transforming IT sector in accordance with international standard and providing access to Pakistani students to different computer programmes of world reputed companies.

As a result of these projects, modern experts will become available to Pakistan in IT sector, job opportunities will be provided to the youth and also help in setting up of new software houses of computer technology.Addressing the function, the Chief Minister said that Punjab government besides setting up of computer labs in 4286 schools and distributing laptops among 1.25 lakh talented students on merit, has made possible access of youth to international computer companies. Similarly, Pakistani youth will get opportunities of learning modern software programming in information and communication technology sectors which will result in development of Pakistani computer industry.

He said that we will move the country ahead by promoting information technology with the collaboration of international companies. The Chief Minister informed that Punjab government is launching an e-employment scheme with the cooperation of Microsoft for 1.25 lakh students who have received laptops. Under this project, various techniques of earning livelihood will be imparted to the students through internet, he added. He said that free Wi-Fi facility is being provided to the students in educational institutions. Similarly, Pakistani students will get awareness about latest research and changing trends relating to their subjects and will be in constant contact with the world of knowledge.

He said that Punjab government’s projects are resulting in promotion of knowledge economy. He said that the culture of IT has been promoted in educational institutions due to laptop scheme. He said that the nefarious designs of those criticizing laptops scheme have been foiled. This is the most transparent project in the history of the country, he added. He said that 21st century is the century of technology and modern inventions in which the developed nations are reaching the heights of progress through development of human resources. He said that these agreements of computer technology are reflection of confidence in Punjab government by the international companies.

Muhammad Shahbaz Sharif said that promotion of information technology has also helped in achieving targets of good governance. He said that Punjab government has completed 42 IT projects successfully in 18 different departments which directly benefited the masses. He said that Intelligent Transport System is being introduced in Lahore for controlling traffic through computer technology. He asked Pakistani computer companies to work hard for getting their share in international computer industry and adopt new trends of research so that Pakistan could become a new center of information technology in south Asia.

The Chief Minister distributed leadership awards among secretaries of provincial departments and police officers who have completed IT projects. Chairman PITB Dr. Umar Saif and representatives of IT companies also spoke on the occasion. Later, the Chief Minister inspected Punjab e-government exhibition and visited stalls set up there. The purpose of this exhibition is to inform the people about the services being provided to the masses through IT in different departments. – PT