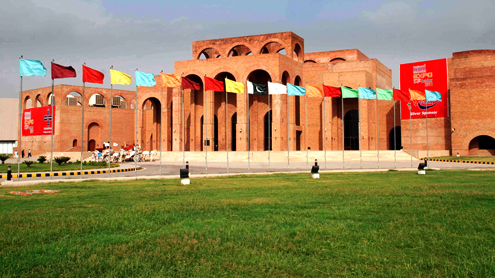 LAHORE: More than 200,000 people, including politicians, bureaucrats, businessmen, businesswomen and young entrepreneurs, visited 200 stalls set up for the three-day Second Expo Lahore at the Expo Centre.
The Lahore Shopping Festival was a joint initiative of the Punjab government and the Lahore Chamber of Commerce and Industry. The weeklong festival, with a number of events in its fold, concluded on Sunday, generated economic activity of millions of rupees. The festival made various stakeholders realise that the private sector had both the ability and the potential to steer the country out of the economic crisis.Though the visitors showed keen interest in all the products put on display at the Second Expo Lahore, Indonesian, Jordanian, Indian and Czech Republic products were of great attraction for them.

LCCI President Irfan Qaiser Sheikh, Senior Vice President Kashif Younis Meher, Vice President Saeeda Nazar and LSF Convener Sheikh Muhammad Arshad addressed the concluding ceremony. Qaiser Sheikh said that the Lahore Shopping Festival was aimed at promoting economic activities in Punjab and the Lahore Chamber of Commerce and Industry had achieved the goal in a winsome manner. He said that the response of Lahoris was marvellous and very encouraging. He said that the Punjab government had extended matchless cooperation to the Lahore Shopping Festival that would go a long way and yield desired results.

He said that the LCCI would continue to arrange such events and play its best role to get the economy back on the rail. Sheikh said the festival was designed to ensure the participation of all segments of society. He said that the LSF was started with a Qirat competition where scholars were the judges and a large number of professional and non-professional qaris took part in it. The second event was a polo match, while the third event was a cricket tournament among all cricket teams of the leading trade and industrial associations of the city, he said, adding that thousands of cricket lovers watched the two-day gala and appreciated it. The team of Pakistan Hardware and Merchants’ Association won the tournament by beating the Shah Alam Market team in a tough and interesting competition.

The LCCI president said that the first of its kind photography competition titled ‘Morning in Lahore’ provided an opportunity to the students of photography to show their skills. It was a successful function, as 300 students from all leading institutions of the town took part in it.The festival also included a Business Plan Competition, which aimed at sharpening the entrepreneurial skills of students and almost all the government and private universities took part in it. A business walk, vintage car show, motorcycle rallies, a wrestling competition and a job fair were also part of the festival, designed to involve the remaining segments of society.

The festival also housed a fashion show and a Punjab cultural night, aimed at highlighting the culture of this part of the country, he said. He said the expo had not only generated business of millions of rupees but also brought into the limelight the real potential of the country. – Dailytimes