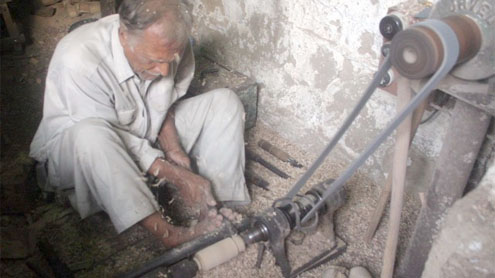 HARIPUR: After the devolution of Labour Ministry, under the 18th constitutional amendment, all provincial assemblies were empowered to enact legislations on labour-related issues.

But in spite of these powers, the Khyber-Pakhtunkhwa (K-P) government is neither enacting new laws nor implementing the existing ones.From the accounts of hundreds of workers, a majority of whom serve in industrial units in K-P, it has been observed that entrepreneurs are consistently violating the labour laws articulated in the constitution of Pakistan and the charter of International Labour Organization. These laws entitle industrial workers to a minimum wage, old-age benefits, social security, compensation, occupational safety and health benefits.

According to a report of the K-P Bureau of Statistics released in 2007, there were around 3.5 million labourers (workforce) in the province, with around 93,000 engaged in the manufacturing industry alone.“The state of the rights of these workers could be judged by the fact that only 2.7 per cent of the total workforce was registered as beneficiary of the Employees Old Age Benefits Institute (EOBI), while only 1.6 per cent availed the facility of social security,” said Qamar Hayat, the executive director of SAHARA Foundation, and organisation that struggles to protect the rights of labourers in Hazara.

Citing SAHARA Foundations’ reports, Hayat said that the government had fixed Rs7,000 as minimum monthly wage for unskilled workers, but the industrialists in Hattar Industrial Estate and in other parts of K-P continue to pay their workers Rs4,000 to 5000. Moreover, he said that only a few units claimed to be following the 8-hour workday as per the labour laws, “while the rest defiantly force their workers to work for 12 hours.”

He said that since the social security facility is “part and parcel” of labour rights, an employer is supposed to pay Rs360 for social security and Rs420 for old-age benefits to EOBI every month for each employee. “But the owners of industrial units conceal the actual number of employees in connivance with the labour department, showing less than 20 workers or 30 per cent of their total employees,” he lamented. Employees are not issued appointment letters, are not allowed weekly off day, and their national holidays are also deducted from their monthly payment.

Hazara Labour Federation Chairman Mian Zahoor said the present labour policy was although welcomed by the labour class when it was issued in 2010, but it failed to incorporate some vital aspects. The policy did not include clauses dealing with issuance of smart cards to workers, payment of wages through checks, enhancing employment opportunities and ensuring equal remuneration for women, eradication of bonded and child labour, social protection for agriculture, and rights of non-formal workers.

Zahoor said the K-P government’s inability to enact legislation in light of the national labour policy following the 18th amendment is the main reason for the rampant violation of labour laws in the province. He demanded that a provincial labour ombudsman should be appointed, cases of labour law violations should be decided by the labour courts rather than the labour director, and that new legislation in light of the national labour policy and with the recommendation of tripartite conference of employers, government and representatives of labourers should be passed.

When contacted, Haripur Labour Inspector Abdullah Khan said his department has been regularly checking industrial units and lodging cases against the industrialists found violating the labour laws. He said that around 2,000 to 3,000 cases of labour law violations are lodged annually, of which some are forwarded to labour courts. “These cases are proof of the department’s efforts to ensure labour laws,” he said. He went on to accuse the workers for failing to cooperate with the labour department to lodge complaints of violations.

Advocate Javed Qureshi, the former general secretary of High Court bar Association, accused the provincial rulers for being “hand in gloves” with the violators, claiming that majority of the politicians either directly own different manufacturing units or have close relatives operating in the industry. “They are not serious in improving the living standard of industrial workers because they do not belong to that very community,” said Qureshi.“What would feudal lords, industrialists, bureaucrats know about the conditions of workers?” he lamented. – Tribune