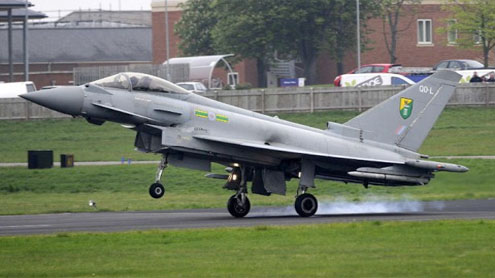 LONDON: London 2012 organisers braced themselves for their biggest test of the Olympic Park on Wednesday while assuring spectators that airport-style security would not mean hours of queuing to get in.

Six test events are taking place at five venues over the next week with 11,000 staff, including volunteer ‘Games Makers’, learning the ropes and seeking to iron out any problems before the July 27 opening ceremony. Organisers expect more than 140,000 spectators and 3,000 competitors to attend hockey, water polo and athletics events as well as Paralympic wheelchair tennis, boccia and athletics at the park in east London.

The crowd flow is expected to peak at 75,000 on Saturday, when the stadium hosts a university and schools athletics event and is officially opened by a lucky spectator picked from the audience with the clock ticking down to 2,012 hours to go. By next week, after what amounts to the first and only comprehensive pre-Games trial of the Park and spectator areas, organisers will have carried out 42 test events in 12 months across 28 venues.

A queue of staff and contractors snaked along the pavement early on Wednesday as reporters, warned to allow up to 90 minutes to clear accreditation and security scans, arrived for a briefing at the hockey venue. That meeting, with LOCOG chief executive Paul Deighton, started behind schedule but spectators streaming in later said their queues had been much shorter and in most cases around 10 minutes.

Some complained of a lack of signage once inside what is still a building site in some areas, with workers in fluorescent jackets erecting sponsor sites including a huge McDonalds restaurant near the main stadium. Groups of schoolchildren trailed past signs warning them to keep off the newly planted areas, with landscaped lawns and flowerbeds.

Long queues to clear immigration at London’s Heathrow airport have triggered front-page headlines in recent days, with fears for the country’s image ahead of the Games, but Deighton was confident that would be dealt with. “Given the publicity that this has attracted, the government and all the authorities responsible are very focused on making sure that Heathrow works well at Games time,” he said.

“I am very focused on it and we will take care of it,” added Deighton, who said Wednesday’s accreditation queue at the Park was a one-off that was flagged up in advance. I think for spectators, we encourage them to build in plenty of journey time,” he added. “You’ve got the whole park to see and enjoy before getting into your venue…so we want to make it a great experience. But we wouldn’t expect the queues coming in through security to extend beyond 20 minutes and in most cases it will be very fast.”

Deighton said the main spectator entrance at the Stratford Gate side of the Park on Saturday would have 60 screening points for pedestrian access and there would be another 100 at Games time. “The principal thing we are trying to achieve is to see how the Olympic Park, as an overall zone, works when it has got a whole set of events going on,” he told reporters standing in front of the pink-and-purple hockey field. “It’s to see how we cope with those crowds, moving around the whole Park, in and out of venues, to and from the Park and through security.”

Organisers expect work on temporary buildings for London 2012 concessions to be completed by early next month while sponsor areas should be finished by the beginning of July. Work by broadcasters to lay cables around the Park will be completed by mid July while landscaping and the installation of flags and banners will continue up until Games time.