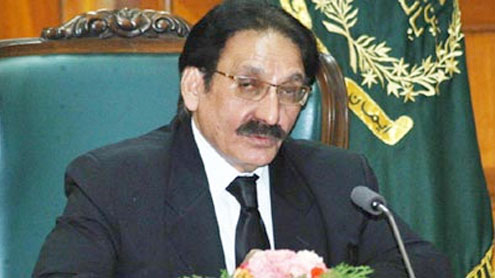 QUETTA: Chief Justice of Pakistan Iftikhar Muhammad Chaudhry has said the issue of missing persons was a major problem in Balochistan but federal government was not cooperating in this connection while the provincial government was helpless.

A three member Bench of Supreme Court comprising Chief Justice Iftikhar Muhammad Chaudhary, Justice Tariq Pervez and Justice Arif Khilji resumed the hearing on deteriorating law and order situation in Balochistan on Wednesday in Quetta Registry of the Supreme Court.The chief justice summoned Chief Minister Nawab Aslam Raisani and Home Minister Zafarullah Zehri for Thursday’s hearing and assure the court that no more dead bodies will be found in the province and the government will protect lives of the people as granted by article-9 of the constitution.

The chief justice said chief minister and secretary home should appear before the court today (Thursday) and give surety that they will protect the life and property of the people as required under article 9 of the constitution.Earlier, during the proceedings, Deputy Attorney General Sikinadar advocate presented the report regarding missing persons and said no development had been made in this connection.Balochistan Chief Secretary Babar Yaqoob Fateh Muhammad apprised the court that Frontier Corps (FC), Military Intelligence (MI) and Inter-Services Intelligence (ISI) had said that they would cooperate for the recovery of missing persons. But he added that “we handed over to them list of missing persons but they did not give any response”.

Balochistan Advocate General Amanullah Kanrani said that in the light of Supreme Court’s order, Balochistan government had decided that steps would be taken for the recovery of missing persons under CRPC.Justice Chaudhry remarked everyday a new story surfaces. In today’s newspaper, recovery of two bodies in Costal Highway had been published, he said. “Just one missing person has been recovered after directive for recovery of certain missing persons. Nobody is worried at what is happening.The relatives of missing persons ask us as to where should they go because no one is ready to take responsibility,” he remarked. Justice Khilji Arif Hussai said those people had their complaints and came to the court to ask the responsible authorities to tell them about the whereabouts of their missing relatives.

Justice Tariq Pervez remarked the court was not helpless nor it would let it to be so. “If federal agencies do not obey the federal government and provincial agencies the provincial government then this system has failed,” he remarked.Supreme Court Bar Association President Yaseen Azad present to assist the court said everything was under control of agencies. The state should fulfill its responsibility; the state should play its due role to ensure the basic rights to the citizens, he added.

He said that IG Police should tell where the missing persons were and if he could not recover them, action should be taken against him. Yaseen Malik said that if the government was not performing its responsibility in accordance with the constitution the judiciary may take appropriate action.Justice Arif Hussain said that when the governments do not fulfill their responsibilities and if they get failed, its solution is present in the constitution. – Nation