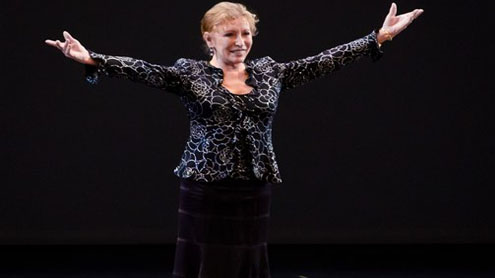 NEW YORK: When people think of famous Soviet dancers who defected to the West, they recall Rudolf Nureyev, certainly, and Mikhail Baryshnikov.

But there was also a formidable woman among them: Natalia Makarova, who defected in 1970 and went on to win glory in Europe and the United States.Now 71, Makarova is retired, but she was the undisputed star over the weekend at Lincoln Center’s David H. Koch Theater as ballet greats gathered to pay her tribute. It was part of a rare and wonderful dance weekend courtesy of the Youth America Grand Prix, or YAGP, a global ballet scholarship competition.It’s in the nature of the art of dance that we almost never get to hear the artists speak. That’s why it was special to hear Makarova, in taped interviews broadcast on a huge screen, describe her life, interspersed with footage of her dancing.

As graceful as the dance excerpts were, it was a treat to hear her recount things that perhaps didn’t go so well. She described getting stuck in a tiny elevator lifting her to the stage; at the time, she was trying to get into the spirit of the Swan Queen. She heard the music playing without her, and finally had to break character to scream at technicians, which she ably demonstrated in the film clip.Of that swan, and other roles, she quipped: “I’ve danced every bird in the business.” She also spoke of her mother: “I gave her lots of trouble.”

Makarova was to appear in the flesh only at the curtain call. First came a truly impressive parade of artists assembled by YAGP, performing bits of signature Makarova roles pieces evocative of her life.It was especially striking to watch Russian ballerina Natalya Osipova. She has appeared in New York for several seasons with American Ballet Theatre, but on Saturday night, she seemed to be the most similar current ballerina to Makarova — in her talent, her build and her potential.

The sprite-like Osipova was impressively malleable in a modern piece by Mauro Bigonzetti, performed with her partner, Ivan Vasiliyev, with whom she recently defected from the Bolshoi to the Mikhailovsky Theater in St. Petersburg.Two other Russian ballerinas also were in radiant form: Diana Vishneva, of the Mariinsky Ballet and also ABT, who performed a deeply passionate pas de deux from “Manon” with Marcelo Gomes, and the raven-haired Yekaterina Kondaurova, also of the Mariinsky, who performed the Black Swan from “Swan Lake” and was even more impressive in a brief piece of William Forsythe’s “In the Middle, Somewhat Elevated.”

The evening was full of high spirits, with many young competitors filling the seats. There are often cheering crowds at Lincoln Center, but ballet fans doing the wave in the balcony? Not so common.Still, the high point was Makarova’s appearance at the end of the show. After taking a few bows, she was hoisted into the air by ABT’s Gomes and David Hallberg — as stars of the present showered respect on an icon of the past. – Themoscowtimes