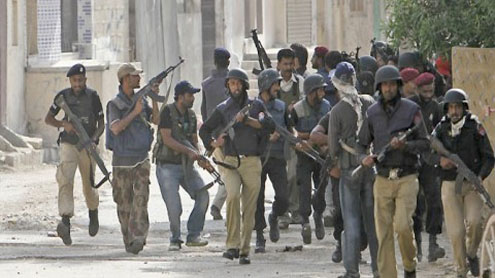 KARACHI: The traders and industrialists are strongly demanding of the government to swiftly complete the Lyari operation which, they complain, was crippling the industrial production.

“Many industrial workers are living in Lyari and a number of factories have shortage of about 40 to 50 percent workers, thus resulting in heavy production loss to the country,” said Patron In-Chief of Korangi Association of Trade and Industries (KAT), S M Muneer. This he said in a statement jointly issued by him, KATI Chairman Ehtesham Uddin, Vice Chairmen Hasham A Razzak, Tariq Malik and President All Karachi Industrial Alliance Mian Zahid Hussain.

The industrialists said the ongoing operation against criminals in Lyari be finalized swiftly so that the peaceful trade and industrial activities could be resumed in this commercial capital of the country. They said the prolonged operation was badly tarnishing the image of Pakistan abroad and had adversely affected the industrial activities which were already remained in lowest ebb due to ongoing energy and other crisis. They said the exports were continuously declining and manufacturers were not getting orders from their buyers due to law and order situation in the city.

“Is it a nuclear power or Banana Republic that a small and simple operation is being prolonged unnecessarily,” Muneer questioned. He demanded of the government to wind up operation in a shortest possible time as peaceful people were also living in Lyari, who had to face extreme conditions and were without water and power and food for the last several days. The traders and industrialists said over 36 persons had lost their lives and many wounded in continuous firing by the miscreants and they were using rocket launchers and hand grenades.

“Surprisingly, the Rangers are not being called to help the police,” they wondered. In our opinion, Muneer said, the government should call Rangers/military and impose curfew to clear this area from the miscreants firing on the police. He said all T.V channels were showing this firing and fighting for many hours daily and creating bad name for Pakistan abroad. – PT