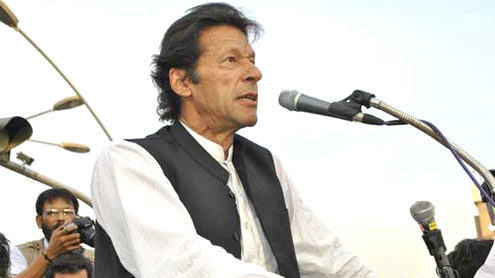 Pakistan Tehreek-i-Insaf (PTI) Chairman Imran Khan, while addressing the ‘judiciary solidarity rally’ in Islamabad, said those who wanted to continue with corruption would never let the judiciary be free.

“The day the judiciary is destroyed will also be the day democracy is destroyed.” The PTI held a rally in Islamabad to show its support for the judiciary following Prime Minister Gilani’s conviction in the contempt of court case.“If the orders of the Supreme Court were not implemented, PTI would organise the largest march in the history of Pakistan.” Imran Khan said.The PTI Chairman further said the Prime Minister was trying to hide corruption.

While criticising PML-N President Nawaz Sharif, he said that rallies organised by the PML-N are insignificant.“Holding a rally in Quetta counts as a brave act, if you want to become Prime Minister, hold a rally in Quetta or Karachi,” Imran said.“If you are serious about your opposition of the government, resign from the assemblies,” he added.The PTI chairman also expressed concerns over US drone attacks, stating that if his party was in Parliament they would have resigned if no action was taken by the government against it. – Dunyanews

Saudi women carve out niche for themselves in medical profession