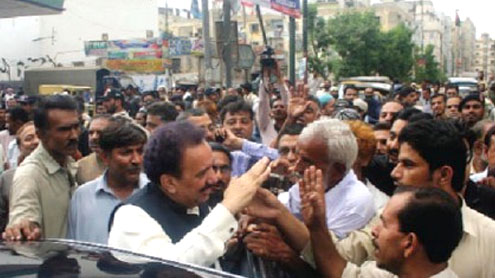 KARACHI: Interior Minister Rehman Malik on Sunday advised political parties to keep their distance from alleged criminal groups in Lyari and support the government’s efforts to maintain peace and security in the city.

“Some political parties’ contacts with criminals in Lyari will encourage lawlessness and such a move can be questioned according to law of land,” Malik said during a media chat at the State Guest House. Sindh Inspector General of Police Syed Mushtaq Ahmed Shah was also present.The minister said that some political leaders, by contacting and encouraging criminals, wanted to create problems for the government and the general public.But, he cautioned, their conspiracies would be frustrated with the support of the people of Lyari who are with the Pakistan People’s Party and its government.

He rejected the impression that a grand operation in Lyari was on the cards after the ultimatum period of 48 hours ends in the evening.A joint force of Rangers, Frontier Constabulary (FC) and police would be there only to ensure safety of the lives and properties of the innocent people of Lyari who are living a very tough life, he said.He also said that criminals had taken hostage and paralysed the population in millions living peacefully for decades.“With deployment of Rangers, FC and police personnel, I want to give the people of Lyari a sense of peace and security,” he asserted.

He, however, warned criminals against being mistaken by the suspension of law-enforcement agencies’ operation and the alleged space given to them (criminals), and not to see it as a weakness of the government.The government would never compromise on the writ of law and would maintain peace in the city at all costs, he added.He said that President Asif Ali Zardari had directed him to maintain peace and restore public life immediately, and “we are using all options available for this purpose.”He also said that it was locally managed police action limited to three streets of Lyari. Police had authentic information that these streets had turned into a stronghold of criminals, he added.

But, he regretted, hype was created by certain quarters of the media and the police action in Lyari was projected as an operation.It was not an operation, but a targeted police action against criminals,” Malik remarked, adding that the police action was successful.He said that the government wanted to apologise to the people of Lyari for the problems faced by them during the police action there.But, he pleaded, it were the criminals who had been using sophisticated and heavy arms, including rocket launchers, in the area that made public movement very difficult.

This also adversely affected the provision of food, water and healthcare, he said. The government has now ordered supply of good amount of food, water and medicines in Lyari, he added.When his attention was drawn to the loss of lives and properties of the general public in Lyari, the interior minister said that the government would duly compensate the affectees.He said that the People’s Amn Committee (PAC) has already been declared as a banned organisation and the government would have no dialogue with PAC men. The law would certainly take its course, he added.

He assured that there would be no extrajudicial killing in the name of maintenance of law and order. He said that Rangers are now present in Lyari and a PAC leader who is wanted in various crime cases should fulfil his promise and surrender himself to the paramilitary force.Malik said that some people were with the PAC men against their wishes and want to leave this notorious ring.He was referring to Habib Jan Baloch who had sent a message to the interior minister that he wanted to disassociate with the PAC to live a peaceful and respectable life. – PT