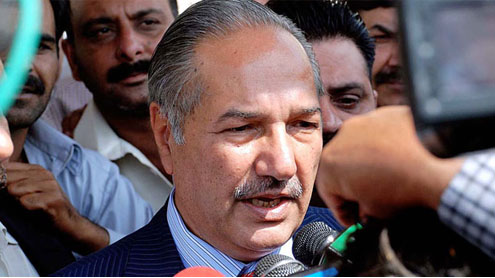 LAHORE: Defence Minister Chaudhry Ahmed Mukhtar on Sunday warned against the ban on Nato supplies to Afghanistan and said if the Nato containers were not given a passage, it would be a violation of international laws and the country might face sanctions.

Addressing a press conference, he said the PPP wanted continuation of the democratic system and there must be no deadlock over any issue.”The PPP leadership stands by Prime Minister Yusuf Raza Gilani and defends his stance in the light of the Constitution,” he added.He said the PPP was waiting for the detailed verdict of the Supreme Court and would chalk out its strategy after it. He said the PPP held the judiciary in high esteem and expected justice from it, adding the party had not demanded resignation from the PM. “Yusuf Raza Gilani will himself take a decision to this effect, if his appeal is dismissed by the Supreme Court,” Mukhtar added.

He said Pakistan had paid a heavy price in the war against terrorism and the government would take all decisions concerning the issue in parliament now. About the Siachen issue, the minister said it was not easy to find a solution to the issue immediately. Federal Minister Samina Khalid Ghurki was also present on the occasion.APP adds: Ahmad Mukhtar said the PML-N had old relations with the judiciary, adding everybody had relations (with the judiciary) but they should not be misused.He said it would a difficult decision to pull out of Siachen.”It is an ego issue. If we pull out, families of martyrs will raise questions,” he added.

The minister said elections would be held within six to eight months and would expose the worth of every party. He said Opposition Leader Ch Nisar Ali Khan should address the issue of Election Commission.About Pak-US defence deals, he said Pakistan had asked the US for joint and coordinated drone attacks, but Washington had refused. He said the future of Babar Awan would be of an ordinary lawyer. He said the defence budget would not be reduced and ‘we will try to balance it’. – Thenews