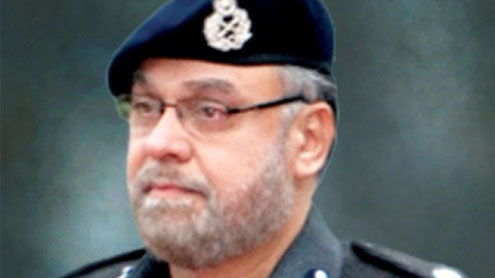 LAHORE: Punjab Inspector General of Police Haji Habib-ur-Rehman has said that supervision levels are being reformed in Lahore police by dividing the metropolitan into north and south zones.

In an interview with the APP here Sunday, he said, “The system is being overhauled to lessen the burden on police officers in dealing with crime in Lahore.”The Punjab Police chief said under the reformed system, the two zones of Lahore police would have one CCPO, two DIGs and two SSPs with powers of DPOs. Regarding security, he said the Police Department had improved its standards regarding security in the aftermath of terrorist activities, adding that the police was equipped with high-level training to deal with challenges.About measures to control terrorist activities, he said the police had improved its intelligence, rules and techniques as well as proposed amendments to the Anti-Terrorism Law regarding the confinement period of terrorists. He said a high-tech forensic laboratory had been established to support investigation.

To a query on kidnapped Shahbaz Taseer, the Punjab IGP said the police had been working on the case and details would be shared after police gathered tangible proofs.Responding to his initiatives as the IG, he said he had taken up the job with a missionary zeal of ensuring transparent and fair dispensation of justice to the masses on their doorstep besides zero tolerance towards corruption and bribery, adding that cases would be instituted against deviating officials.“I have visited all districts and police ranges and established a close contact with my officers and made it clear that deviation in the dispensation of justice will not be tolerated,” he said.

About pending challans, the IGP said there was no pendency overdue and the police had submitted all pending challans in courts by the end of February, saying that police would submit all challans in courts within 15 days in future.Claiming to revamp ‘Thana Culture’, he said some 100 model police stations had been established at Rs 60 million to reform police, adding that reporting rooms would be set up outside main buildings of the 350 police stations where people would comfortably report their grievances to polite police officers without entering the main building of the police station. He said people would not have to enter the main building of the police station for preliminary complaints.

Regarding elimination of bribery from the Police Department, he said a system had been developed in which people could pass on information on the erring police officials and strict disciplinary action was ensured against them. He said all police officers held ‘open Kutcheries’ including the IGP in their offices and heard the grievances of people while an online system had also been initiated so that people could record their complaints.Denying political influence in postings, he said if an officer exerted political pressure for his posting, a para was entered in his annual confidential report (ACR) which would block his promotion chances.

The Punjab IGP said postings of RPOs and DPOs had been made on merit from amongst the best available lot, adding that the Punjab chief minister had endorsed his recommendations. To a query, he said the department needed three times more policemen than the current 175,000 strength while Lahore had the services of 27,000 police officials only, adding that Faisalabad was short of 12,000 policemen to fulfil its operational needs.Regarding VIP security duty, he said plans were being finalised to set up a Security Division of the police with its own logistics and force and it would carry out security of VIPs and VVIPs without harming the day to day business of the police. – PT