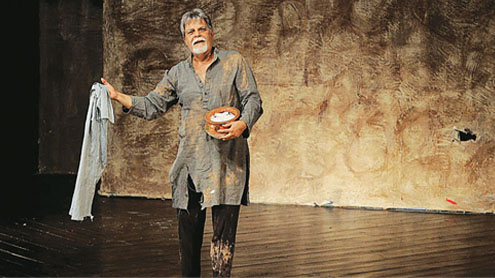 The play, written and directed by Sarmad Sehabi, was a solo performance by the legendary TV and film actor, Shakeel.The play focused on themes of chaos, anxiety, poverty and terrorism rampant across the country, especially in Karachi.

Shakeel played the role of an old man who had lost his memory, and wandered about the streets in old, dirty clothes. He talked to himself and to different imaginary people, birds, mountains and sky in order to express his feelings about the deplorable situation of his country. “The city of lights, peace and love has been turned into the city of smokes, blasts, and dead bodies,” said the protagonist in one of his dialogues.

There was a complete silence in the hall during the play, with the audience spellbound by Shakeel’s performance. The audience gave a standing ovation to the actor at the end of the play.Shakeel is a celebrated actor, known for his roles in ‘Ankahi’, ‘Uncle Urfi’ and many other plays. He was awarded with Pride of Performance award in 1992 for his excellent work in the field of arts. – Dailytimes