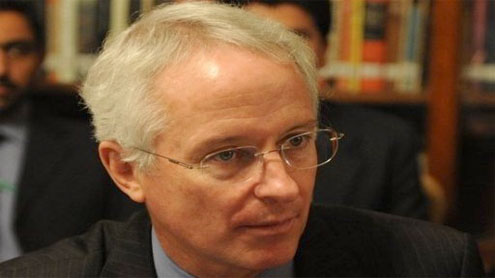 US ambassador to Pakistan Cameron Munter

The U.S. ambassador to Pakistan, Cameron Munter, plans to step down from his post this summer after less than two years on the job, the Washington Post and Reuters are reporting.

Sources tell Reuters that the White House is looking at Richard Olson, who orchestrates U.S. development and economic activities in Afghanistan, to fill the role after Munter leaves.

Munter was sworn in as ambassador to Pakistan in October 2010, and his departure this summer would make his time on the job shorter than an ambassador’s typical tenure. The Washington Post reports that his exit “is not related to any particular policy dispute, either with the administration or the Pakistanis.” But Munter has served at a time of tense relations between the U.S. and Pakistan. – Yahoonews