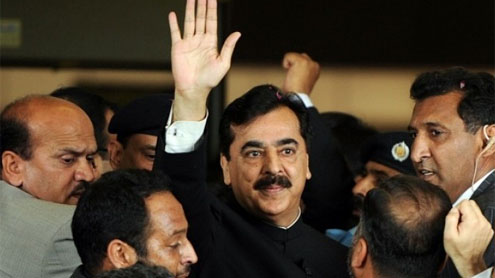 ISLAMABAD: The Supreme Court of Pakistan has issued a detailed order in the contempt case against Prime Minister Yousaf Raza Gilani.

The order has been compiled by Justice Nasirul Mulk and a six-page additional note has been written by Justice Asif Saeed Khosa.The detailed verdict came out on the day when Gilani left for the UK on an official trip to participate in the Enhanced Strategic Dialogue with the British leadership with only 12 members entourage.The document consists of statements presented in different phases of the case by Gilani’s counsel Aitzaz Ahsan and the attorney general of Pakistan.

In the detailed verdict, the court clarified that:

These provisions of the Contempt of Court Ordinance clearly show that despite his culpability having been established, a Court seized of a matter of contempt is not to hold the offender guilty or punish him for every trivial contempt committed and it is only a grave contempt having the effects mentioned in Section 18(1) that may be visited with a finding of guilt or punishment.

We are, therefore, fully satisfied that such clear and persistent defiance at such a high level constitutes contempt which is substantially detrimental to the administration of justice and tends not only to bring this Court but also brings the judiciary of this country into ridicule.

The Supreme Court also said that not charging the prime minister for contempt would leave the judiciary open to others following his example:

After all, if orders or directions of the highest court of the country are defied by the highest Executive of the country then others in the country may also feel tempted to follow the example leading to a collapse or paralysis of administration of justice besides creating an atmosphere wherein judicial authority and verdicts are laughed at and ridiculed.

The Supreme Court had convicted Gilani on April 26, 2012. If the conviction was historic, the sentence was largely symbolic – detaining the prime minister in courtroom number 4 till the “rising of the court” or about 37 seconds to be precise.

Gilani was held in contempt by the Supreme Court for his refusal to write a letter to Swiss authorities to reopen graft cases against President Asif Ali Zardari.

A seven-member bench headed by Justice Nasirul Mulk had announced the verdict and convicted him for violating Contempt of Court Ordinance 2003 section 5 and the charges framed against him were for willfully disobeying the court’s orders and ridiculing it.

Gilani can appeal against the verdict within a period of 30 days, a deadline which had started when the short order was announced.

A new bench will be constituted to hear the appeal.

As stated in the short order released earlier by the Supreme Court, Gilani may be disqualified from parliament:

“It may not be lost sight of that, apart from the other consequences, by virtue of the provisions of clauses (g) and (h) of Article 63(1) read with Article 113 of the Constitution a possible conviction on such a charge may entail a disqualification from being elected or chosen as, and from being, a member of Majlis-e-Shoora (Parliament) or a Provincial Assembly for at least a period of five years.”

“Anyone who flouts Article 63(1)(g) gets disqualified for a period of five years,” said Justice (retd) Shaiq Usmani while talking to Media. – Thetribune