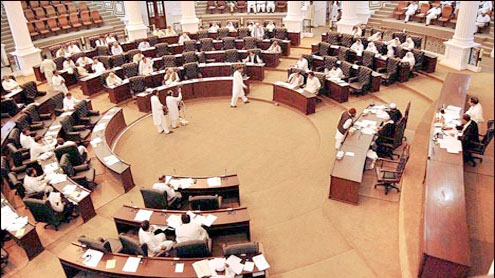 The local government system 2001 would be replaced with the new system soon after formal notification by the government subsequently Municipal Corporation Peshawar and municipal committees would in place city district government Peshawar and district governments formally in KPK.The JUI-F’s Mufti Kifyatullah and PPP-S’s Israrullah Gandapur withdrew their amendments to the bill, afterwards KPK Senior Minister Bashir Bilour tabled the bill, which was unanimously passed when Acting Speaker Khushdil Khan Advocate moved it for voice vote.

Bashir Bilour, who also holds the portfolio of local bodies, said KPK was the first province to pass this bill, adding that they would hold local bodies elections on party basis. “We discussed the bill first in the selected committee and later in the cabinet for three hours.” In the previous bill, it was impossible for a person to look after all the departments and now the elected people would not enjoy the executive powers, he told the house.

As elected persons had their own compulsions and they could not declare thieves as thieves. In the past, all the nazims from Swat had left the area and there was no one who could issue directives to the local police to control the situation. Same was the case in other districts including Peshawar.The local government minister said that executive powers should be with the executive officers to run the affairs accurately. He said they also discussed this bill with all the commissioners, secretaries in a meeting held with the chief secretary suggesting the movers to withdraw their amendments at this stage. He argued that they could move any amendment later if they wanted any change later.

Under the new bill, local area development authority would be replaced by local government development department. Each district would have a chairman and deputy chairman in place of district nazim and naib nazim at district level.Moreover, each union council would have eleven members strength, of whom seven would be directly elected, while four seats would be specific – two for women, one each for peasant and minorities.For a union council, the eleven members would elect a chairman among themselves. As officio, chairman of a union council would also be member of district council.

Similarly, member of a union council would be responsible for their concerned wards in the council.Speaking on the occasion, JUI (F)’s Mufti Kifyatullah condemned the brutal killing of Mufti Naseeb Khan urging the government to register case against the criminals and called for action against the responsible killers.  He maintained that killing of Ulema had created unrest among the students and Ulema in Madaris.He said it would be impossible for them to control the situation if these peaceful people turn violent saying the only crime of late Mufti was that he was teaching Quran.

Bashir Bilour said the government would try to take action against criminals.He, however, posed a question as to how many of them had quit their MMA government when Maulana Hasan Jan was assassinated. He said his party’s had termed Afghan war a war between two super powera but the religious parties had declared it a jihad on the basis of dollars.On this occasion, JUI-F’s Mufti Janan complained and condemned the government for allegedly deleting subjects relating to the Holy Prophet, his daughter, his companions, Quaid-e-Azam, Mohammad Ali Jinnah and Allama Iqbal from Pakistan Studies of class 5th.

He demanded investigations and unveiling of the responsible people in this regard.PPP’s MPA Noor Sehar walked out from the proceedings in protest against the acting speaker Khushdil Khan advocate for not allowing her to raise questions during Monday proceedings. However, later led by KP information minister Mian Iftikhar Hussain, Minister for Women and Social Welfare, Sittara Ayaz, Shagufta Malik, Nighat Orakzai brought her in the house. – Nation