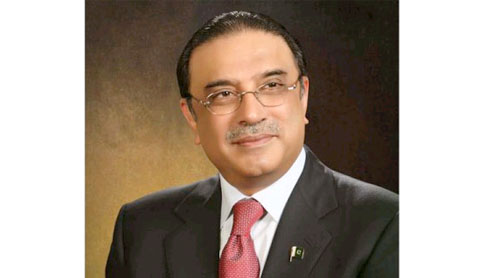 ISLAMABAD: President Asif Ali Zardari has said that Pak-EU 5-year Engagement Plan and the upcoming Strategic Dialogue were the important landmarks in Pak-EU partnership which he said was moving steadily forward along an upward trajectory since 2008.

Addressing a gathering of EU diplomas, Ministers, Parliamentarians to commemorate 50th anniversary of Pak-EU relations being held at Aiwan-e-Sadr this evening, the President said that Pakistan attaches great importance to its excellent relations with the European Union which were “based on shared democratic values, principles of mutual respect, trust and cooperation.” He said that the 50 years long association reflects the commitment the two sides have made to strengthen the mutual relations and cooperative partnership. The President said that European Union was a key partner in peace and development of Pakistan.

He said that it was an important ally in the campaign against terrorism, the biggest trading partner, and a major source of direct investment. The EU, the President said, has supported democracy and helped Pakistan in difficult times. We greatly value and thank the European Union and its member states for their support and assistance to Pakistan, the President said.The President, on this occasion, also appreciated the contributions made by EU Ambassador in Pakistan Lars-Gunner Wigemark and Pak Ambassador in Brussels, the current Foreign Secretary Jalil Abbas Jilani for their efforts to further strengthen the equation.

The President said that Pakistan was working with the EU to build a mutually beneficial strategic partnership.He said that during the last 50 years the EU has passed through momentous changes and has emerged bigger and stronger. Despite economic difficulties, it has stayed the course and emerged as an important global player, the President continued. He said that Pakistan too has faced many challenges and braved many storms in the course of its history. We are passing through a crucial phase now, he said. The President said that Pakistan was again on the frontline in the campaign against terrorism. This struggle, he said, was exacting massive human and economic costs.

The President said that besides the great toll of the ongoing war against terrorism, the economic difficulties have been further compounded by back-to-back natural calamities, rising international oil prices, the energy shortage and the climate changes. But, he continued, positive developments were also taking place simultaneously. He said that Pakistan has undergone a silent revolution which has revived the spirit of Pakistan. A democratic and progressive Pakistan has been emerging in line with the vision of the founding father, Quaid-e Azam Muhammad Ali Jinnah, Shaheed Zulfikar Ali Bhutto and Shaheed Mohtarma Benazir Bhutto, the President said. He said that our Constitution guarantees equal rights to all citizens irrespective of faith, cast or gender. – PT