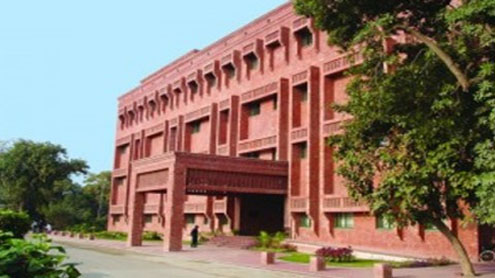 LAHORE: The Forman Christian College History Department, hosted a conversation with legendary film star Shabnam in collaboration with the Zohra and ZZ Ahmed Foundation on Tuesday.

Talking to a packed hall, where students born after her retirement from Pakistani films outnumbered older people, Shabnam mesmerised the audience simply by her presence which drew a standing ovation as she entered.While being interviewed by FC College History Department Professor Dr Yaqoob Khan Bangash, Shabnam pointed out that it was her sheer hard work and dedication which made her so successful. She said ‘There were lots of people in the industry, and I do not want to name them-who said that I would not succeed since I could not speak Urdu and did not have the flamboyance of the usual actresses.’ Those comments, she said, made her work day and night to improve her acting.

Asked about the effect of the separation of Bangladesh in 1971, she said initially she did feel apprehensive, especially since one of her films was coming out during the last days of the war, but that she trusted that the fans would look beyond her Bengali-ness and focus on how well she had acted and that is exactly what happened and so she remained in Pakistan.

During an extensive question and answer session she was joined by her husband the legendary music director, Robin Ghosh.The questions asked Shabnam ranged from her favourite film and song, to the secret of her beautiful hair, to which she quipped: “It runs in the family. Coconut oil and the Bengali diet too,” to the audience’s applause.Ghosh was also presented with a Masters’s degree thesis written about him by a student of the Punjab University Music Department. The event ended with the presentation of a bouquet to the guests by FC College Executive Vice-Rector Dr James Tebbe. – PT