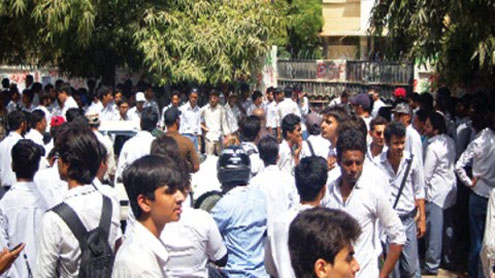 Student Strike outside the National College

KARACHI: The Sindh Professors & Lecturers Association (SPLA) ended their boycott of the Board of Intermediate Education Karachi (BIEK) examinations after assurance of the board administration of foolproof security outside exam centres.

The principal, Prof Waseem Adil, and Prof Muhammad Asim Hussain of the college were brutally beaten up and the principal’s office was also wrecked.Prof Adil said that the activists of the two student organisations had been giving him death threats since the start of the BIEK exams on Monday.“They had been demanding to allow some of the students to use unfair means to take their exams. Today (on Wednesday), some activists of the student organisations attacked me and my teams after the morning shift exam,” he added.They were threatening Adil when the paper of Urdu part-I of the pre-medical, pre-engineering, home economics and medical technology groups started, but they could not succeed in their aim in the presence of police and Rangers, he said, adding that when the law enforcers returned after the morning shift exam, he and his team were attacked.

Later, the teachers in the Government National College Bahadurabad refused to invigilate the commercial geography part-II exam of the commerce group.BIEK Controller of Examinations Muhammad Imran Khan Chishti arrived at the college and tried to normalise the situation, but the teachers refused to listen to him.The students who were at the college to take their commercial geography part-II exam staged a protest against the college administration for refusing to invigilate their exam.The controller tried assuring the candidates that they would be shifted to the nearest exam centre through BIEK’s transport for taking their exam, but the students refused his offer.

Chishti then postponed the commercial geography part-II exam at the Government National College Bahadurabad only.The SPLA then announced boycotting the BIEK examinations from Thursday to protest the arrogance of the students while dealing with teachers at the Government National College Bahadurabad.They demanded the BIEK administration and the government to provide security to teachers at the exam centres and announced that the teachers would boycott the exams until the board ensures security at the centres.On Wednesday night, representatives of the SPLA, the Karachi commissioner and the BIEK administration held a meeting.

Karachi Commissioner Roshan Ali Sheikh said that as per the directives of Sindh Chief Minister Syed Qaim Ali Shah, the government would provide foolproof security outside the exam centres during BIEK examinations.On assurance of the chief minister and commissioner, the SPLA ended their boycott and announced that the teachers would invigilate the board examinations as per schedule.MQM condemns violence against teachers.The Rabita Committee of the Muttahida Qaumi Movement (MQM) has condemned in strong words the incidents of violence against teachers and acts of vandalism by miscreants of a students’ organisation in different educational institutions of the city.

Members of the committee said that the elements involved in such incidents are enemies of peace and education.They said that the use of unfair means in taking examination is highly unfortunate and the miscreants of the students’ organisation supporting it want to deprive the students of a real education.They demanded Sindh Governor Dr Ishratul Ebad Khan and Sindh Chief Minister Syed Qaim Ali Shah to look into the cases of widespread copy-culture and use of violence against teachers at the Adamjee Government Science College, the Government College for Men Nazimabad and the Government National College by a certain students’ organisation.The elements involved in such incidents must be brought to book and action should be taken to stop the use of unfair means for passing in examinations, they added. – PT