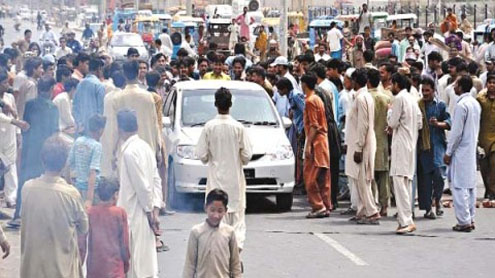 LAHORE/VEHARI/FAISALABAD/MANDI BAHAUDDIN: Heat-stricken and load shedding-marred, the people of Punjab found it appropriate to take to streets, roads and highways on Thursday to vent their anger against colossal power cuts across the province, with many resorting to arson of several government installations and ransacking of political parties’ offices in desperate attempts to make the government realize their agony.

Load shedding across the province, including in Lahore, Faisalabad and Sialkot – the main trade hubs of Punjab – is almost being conducted for the entire day, with only “short bursts” of power giving respite for an hour or two. Thousands of protesters took to the roads, ransacked the offices and residences of lawmakers and politicians, attacked WAPDA installations, staged sit-ins, damaged vehicles and clashed with police on Thursday, resulting in injuries to several protesters and policemen in various parts of Punjab.Demonstrations against unscheduled electricity load shedding were held in Vehari, Lahore, Faisalabad, Gujranwala, Mianwali, Mandi Bahauddin, Sargodha, Khushab, Bhakkar, Burewala, Jhelum, Multan, DG Khan, Pir Mahal and Bahawalpur.

In Vehari, protesters with batons went on a rampage, damaging public property and a WAPDA office. The protesters broke open the main gate and walls of the WAPDA office, broke windowpanes and doors, and set on fire all office record and equipment. They also set ablaze a jeep, five motorcycles and 10 bicycles parked in the premises.

Several protesters also attacked the office and residences of lawmakers and politicians, including that of PML-N MNA Tehmina Daultana. The residence of Saqib Khurshid, former tehsil nazim and PML-N leader, was also attacked. Some went further ahead and attacked the office of PML-Q MPA Tahir Iqbal Chaudhry and PTI Vehari District President Tahir Anwar Wahla and set them on fire. The story did not end there, as the furious mob attacked the Rescue 15 office as well. The Vehari District Bar expressed solidarity with the protesters and observed complete strike. Lawyers forced their entry into the DCO Complex and MEPCO Complex and ransacked them. – PT