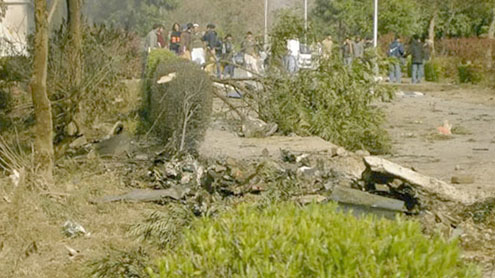 It was the sixth Pakistan Air Force crash in seven months and the second in a week, raising concerns over the safety of its largely Chinese and locally made fleet.The cause of the accident was not immediately clear.One of the two-seater propeller Mushshak planes crashed on a house, injuring a girl and an elderly man, and the second fell in nearby fields in the Rashkai area, 160 kilometres (100 miles) northwest of the capital.

“Two Pakistan Air Force trainer aircraft collided mid-air. Four pilots were killed, two were trainee pilots and two were instructors,” district police officer Mohammad Hussain said.“One of the aircraft crashed over a house, injuring a girl and an elderly man, and the second plane crashed in the fields.” Another police official, Hayatullah, who uses only one name, confirmed the casualties.

Last Friday, a fighter jet crashed near the southwestern town of Sonmiani but the pilot managed to eject safely.The Pakistan Air Force has a fleet of Chinese aircraft including F-7PGs and A-5s, plus US-built F-16s and French Mirages. It recently acquired medium-tech JF-17, or Thunder jets, manufactured jointly by China and Pakistan. – Dawn