How a big meal hits our waistline in just 3 hrs! 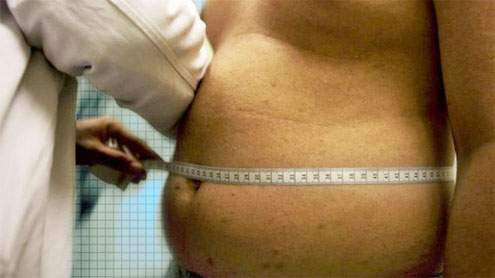 ISLAMABAD: There may be some truth to the saying `a moment on the lips, a lifetime on the hips`.

Scientists have found that once eaten, fat is stored on the waistline within hours – far faster than previously thought.Within just three or four hours of having a meal, up to two or three teaspoons of fat from the food gets stored.And if eaten again shortly afterwards, the fat stored around the middle will grow and grow.Those who like to tuck in at dinner should take particular note, as fat from meals eaten later in the day is especially likely to be stored around the middle.

The finding that it is possible to `become fat` within three hours contradicts the popular belief that weight gain is gradual.It was believed that fat from food was transported from the gut into the blood, where it could be used by the muscles as needed.Any excess was thought to be gradually removed and stored in the fatty, or adipose, tissue around the waist, hips and legs.However, the Oxford University research indicates a more complex – and rapid – process.In the experiments, volunteers ate fat, which could be traced around the body. This was found to take around an hour to be broken down in the gut and then enter the bloodstream as tiny droplets, the Daily Mail reported.

The droplets are then whisked around the body – but not for long – before they are `caught` and stored.“The process is very fast,” said Fredrik Karpe, professor of metabolic medicine.“The cells in the adipose tissue around the waist catch the fat droplets as the blood carries them and incorporates them into the cells for storage.”Only a small amount of the fat found in breakfast takes this route. But, by dinner, the amount increases to half. This is because of hormonal changes that occur later in the day which make it easier for the stores in the waistline to trap passing fat droplets.

In a dinner with 30g of fat, two to three teaspoons of lard will rapidly gather around the waist.However, the storage system is temporary, with the fat deposited quickly drawn on, or mobilised, to feed our muscles. But when we overeat, it is a different story, Professor Karpe cautioned.“If you eat too much, you don`t get into this phase of starting to mobilise it,” he said.“There will just be constant accumulation and you will start to put on weight,” he added. – Onlinenews