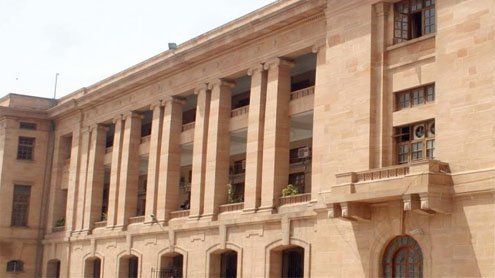 KARACHI: The Sindh High Court on Friday directed the Election Commission of Pakistan to announce a schedule for local government polls in Sindh and ordered the provincial government to hold the elections within three months.

The order was passed on a petition filed by Nasir Hussain Shah, a former district nazim of Sukkur and chief of the Union Councils Association.A division bench comprising Justice Faisal Arab and Justice Nadeem Akhtar allowed the petition by a short order for reasons to be recorded later.The petitioner through his counsel Advocate Shabbir Shah submitted in court that by virtue of the impugned Sindh Local Government Ordinance (SLGO) and the Act of 2010 replacing the SLGO, local government polls were postponed for an indefinite period and administrators were appointed to the public offices.

The counsel argued that the people’s right as enshrined in the Article 140 A of the constitution to franchise by forming local governments was being denied due to the prolonged delay in holding local government elections.He said the Supreme Court while hearing the Balochistan violence case had directed the chief secretaries of all provinces to explain that why Articles 140 A and 32 were not followed and why the local government polls were not held.

He also referred to the candid admission of the official law officers to the effect that the holding of the LG elections were a constitutional requirement but the government was unable to carry out the exercise due to heavy floods in the province and for want of the required legislation for the purpose.The counsel submitted that the Sindh government failed to hold the LG election in the last three years in the name of amendment to the relevant laws.

Additional Advocate-General Shafi Mohammad Memon prayed to the court to put off the matter as the apex court was already taking up it. He also stated that the delimitation of talukas and districts, preparation of computerised voter lists and other requirements for holding the polls were yet to be done.The bench, however, asked the election commission to announce a schedule and ordered the provincial government to hold LG elections within three months.

A division bench headed by Justice Munib Akhtar put off the hearing of a petition challenging the unseating of Dr Arbab Ghulam Rahim as member of the Sindh Assembly by the house, after Advocate-General Abdul Fatah Malik raised question about its maintainability.He argued that the proceedings of the provincial assembly were protected and could not be called into question before any court of law.

He submitted that Dr Arbab Rahim was unseated through a resolution adopted by a majority of legislators for his continuous absence from the house proceedings. The AG submitted that the petitioner had been absent for 40 days and described the assembly resolution to disqualify him on the basis of his continuous absence as lawful. He also produced the record of the relevant house proceedings in compliance of the court order.The bench adjourned the hearing to May 22.

On April 14, a division bench had suspended the Election Commission of Pakistan notification regarding a by-election on Dr Arbab’s Tharparkar constituency (PS-60). The ECP had fixed the pollsing for May 19.The order suspending the notification was issued on a petition filed by Dr Arbab Rahim’s son, Arbab Inayat Ullah, who had challenged the assembly’s decision to unseat his father.

Dr Arbab was elected MPA from PS-60 in 2008 and stopped attending the assembly proceedings after a shoe attack on him soon after the oath-taking ceremony in the house in April 2008. On March 22 this year, the Sindh Assembly unseated him through a resolution. Later, the house declared his seat vacant.Dr Arbab has been living abroad for the last four years for security concerns. – Dawn