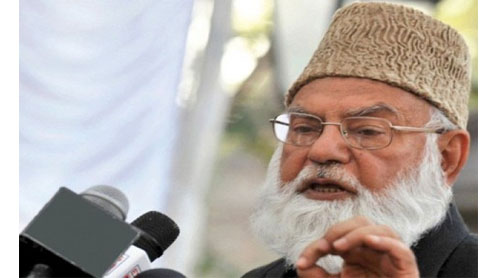 LAHORE: A broad-based non-political alliance of religio-political parties is expected to be launched on Monday (tomorrow) when former Jamaat-i-Islami amir Qazi Hussain Ahmed, duly mandated by his party, hosts a conference at a five-star hotel in Islamabad.

Leaders of parties representing all religious schools of thought will be among the participants.The new coalition will try to settle differences among religious parties with a view to uniting them at a time when the country faces a number of threats from the powers occupying Afghanistan for the last one decade. At a later stage, the forum will also try to remove all hurdles in unity among the Islamic countries.The leadership understands that it is going to be a daunting task, but they are determined to achieve the target at any cost. Settlement of Shia-Sunni differences will be on top of the agenda, and the participants will devise a strategy for the purpose.To ensure that the proceedings of the day-long conference go on smoothly, the organisers have decided to invite Sipahe Sahaba Pakistan (a Sunni organisation) and Millat-i-Jafaria (representing Shias) in separate sessions.

In Monday’s session, the Shia leaders will be there, but the SSP representatives will be invited to some other session.A committee is expected to be formed to find commonalities between Shias and Sunnis and persuade them to work together. The proposed alliance will also carry out a number of other tasks.For example, for the first time in the country’s history, an attempt would be made that sermons to be delivered in Juma prayers from all mosques are on the same subject.To make it possible, a committee is likely to be constituted by the conference participants. The recommendations made by the Council of Islamic Ideology on a variety of subjects remain unimplemented.