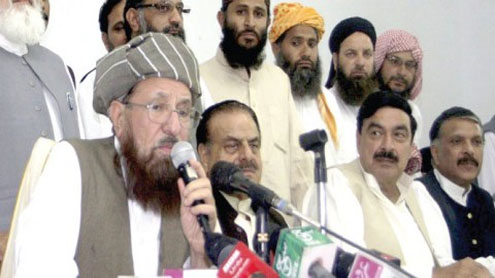 ISLAMABAD: Difa-e-Pakistan Council (DPC) has announced the schedule of its long march, to be held against proposed restoration of NATO supply lines.

The long march would start on May 27 (Sunday) from Karachi and culminate on June 6 (Wednesday) at ‘D-Ground’, outside the Parliament House, Islamabad.The DPC’s long march would reach Sukkur on May 28 and Rahim Yar Khan on May 29. On May 30, it would be at Bahawalpur. Similarly, it will arrive at Multan on May 31.Then the long march will turn up in Sahiwal on June 1 and at Jhelum on 5 June.