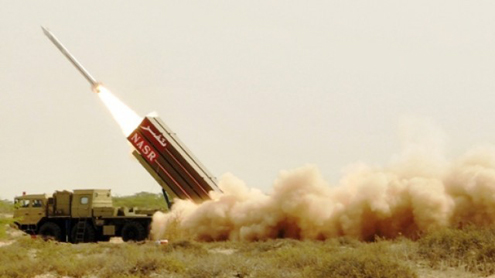 The Director General Strategic Plans Division, Lieutenant General Khalid Ahmed Kidwai (R), terming the NASR Missile as a weapon of peace, said that the test was a major development which will consolidate Pakistan’s deterrence capability at all levels of the threat spectrum, thereby ensuring peace in the region. The successful test has also been warmly appreciated by the President, Prime Minister of Pakistan and Chairman Joint Chiefs of Staff Committee, who have congratulated the scientists and engineers on their outstanding success. Earlier, Pakistan had test fired nuclear capable Hatf-III Ghaznavi missile on May 10.-onlinenews