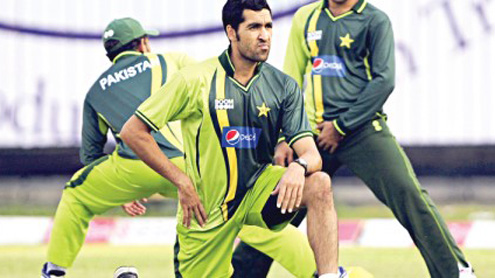 PESHAWAR – Pakistan Army commandos raided cricketer Umar Gul’s house in Peshawar on Wednesday and arrested his brother on charges of harboring a wanted militant, according to media reports.

The fast bowler’s brother, Meraj, was arrested with two other men on charges of providing shelter to his uncle, Haji Daly, believed to be an active member of the banned Lashkar-e-Islam, a private TV channel reported. A local resident told reporters that a team of commandos had raided the house. Two paramedics, Younas and Shakil, were among those arrested. They were moved to an undisclosed location. An official of the local police station claimed Haji Daly was injured in an operation by armed forces in Bara tehsil of Khyber Agency and had fled to Peshawar and lived with Meraj for several days before leaving the city.

The Khyber Agency is a stronghold of the Lashkar-e-Islam. “The injured man was brought to Hayatabad Medical Complex with two local paramedics who changed his bandages,” the official said. The injured man left the hospital without his identity being ascertained, he said. Reports indicated that the two arrested paramedics were employees of a maternity home located adjacent to Gul’s house. Gul’s family owns the maternity home. However, members of Gul’s family declined to comment on the matter. A cousin of Gul confirmed that a raid had been carried out and three people were arrested. Umar Gul’s brother Meraj Gul claimed the raid on the family’s clinic was conducted due to a “misunderstanding” and that security forces had apologised to him. -pakistantoday

National budget to be announced tomorrow

National budget to be announced tomorrow