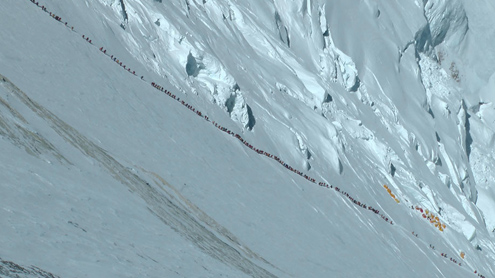 Ralf Dujmovits had reached the South Col of Mount Everest, at a height of just under 8,000m, on 18 May when he made the painful but necessary decision to turn back due to the stormy conditions that had taken hold at the summit.

The 50-year-old German, who is considered to be one of the most experienced mountaineers in the world, was astounded and horrified to see a long queue of tourists snaking their way up the mountain as he struggled to descend in difficult conditions. He described his experience on Wednesday after an image from his camera caught the attention of picture editors around the world with its depiction of human overcrowding on the most popular mountain in the world.  “I was at around 7,900m and saw in the distance on the Lhotse face a human snake, people cheek by jowl making their way up. There were 39 expeditions on the mountain at the same time, amounting to more than 600 people. I had never seen Everest that crowded before.” Speaking from the Black Forest, after returning home last Friday, Dujmovits said that as he took the photograph two things were prominent in his mind. “I was thinking how absurd the scene was. Watching them, I had a strong feeling that not all of them would come back, and I wrote as much in my internet diary.

“That leaves you with a really oppressive feeling that some of the people in the picture would soon be dead. I was also filled with sadness [for] this mountain, for which I have immense respect together with the experienced sherpas, that a great deal of that has been lost. People nowadays treat the mountain as if it was a piece of sporting apparatus, not a force of nature. It really makes my soul ache.” In the event, four people died on the mountain that weekend. Dujmovits said he was glad his picture had triggered such an emotional response, and hoped it would deter inexperienced “hobby climbers” from embarking on the climb “just so that they can boast to their friends when they get back ‘I’ve climbed Everest’, like people who flash the Mercedes symbol around boasting that they’re rich enough to have one”. He added: “In fact it takes no skill to do what most of the tourists to Everest do. The growing trend in the last 10 years has been to use oxygen almost from base camp onwards, whereas for decades it was only considered to be normal to use it from 8,000m onwards. Now they drink it like it was water..

” Dujmovits said he had witnessed “ridiculous” scenes of people who should never have been allowed on the mountain in the first place.  He spoke of encountering an “overweight French journalist – a small woman weighing around 80kg, who had used her entire supply of oxygen before she’d reached any height at all, and an American of Turkish origin who was carrying his bicycle with him because it had always been his dream to take it to the summit and insisted on fulfilling that dream at whatever cost”. The mountaineer, who was ascending Everest for the sixth time, said he felt hysteria had broken out on the mountain.”The weather prospects were bad, the jams of people were appalling and therefore also led to hours of waiting around which led to hypothermia and exhaustion. Many were dehydrated. “But none of that seemed to have put people off.,” he said. “As far as I could see a state of mass hysteria had broken out. Everyone was fixated on making it to the summit by 19 May or they faced the prospect of missing their chance for that season.” He said that when he returned to Kathmandu, “the hospitals were heaving with patients, most of whom were bing treated for severe hypothermia and frost bite”.

He issued a passionate plea to the Nepalese government to introduce stricter regulations to control both the flow of tourists and to filter out those not physically fit enough to do the climb. “Nepalese organisations are picking their customers from the internet without any concern as to whether they are capable of the journey. I am anti regulation, but I think the Nepalese government has little choice but to ask tougher questions of would-be climbers in future. “They should be asked to state which mountains they have climbed, to provide details of their fitness and to prove in general that they’re mountaineers. “Everest has been pushed to its limits, and a complete change of mind needs to take place otherwise we’ll see many more tragedies taking place. ” He added: “We need to debunk the myth of Everest.” Despite a long-held wish to ascend it once more without oxygen, he would not climb Everest again. “It’s spoiled for me now,” he said. “And it’s too dangerous. There are simply too many people on there who should not be there.” -TheGuardian