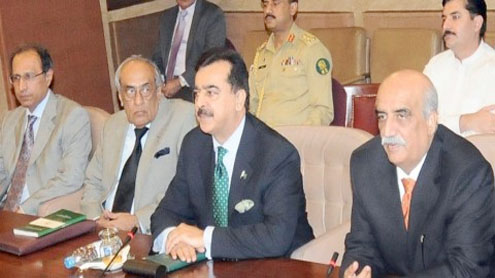 ISLAMABAD: The budget debate in the Lower House of parliament turned into an anti-Gilani protest on Tuesday when Pakistan Muslim League-Nawaz (PML-N) lawmakers made life miserable for the prime minister who tried his best to appear oblivious to the protesting members and focused on the speeches of his fellow party men on the budget.

With the arrival of Prime Minister Gilani in the House, the N leaguers encircled Gilani and raised slogans against him. The back-benchers of the PML-N were at the forefront of the protest against the PM.“Qaum Phukhi MartTi, Hai People’s Party. Mukk Gaya Tera Show Gilani, Go Gilani Go Gilani” were the main slogans raised by the PML-N members. Gilani kept a defiant smile on his face during the sloganeering.

However, realizing that PML-N members were heading towards the PM’s chair, some PPP MNAs gathered around Gilani to shield him from the reach of the demonstrators. However, following the evening prayer break, things turned back to normal when a majority of the PML-N members did not turn up in the session and the few present remained glued to their seats.Due to the rumpus and noisy atmosphere, MQM leader Dr Farooq Sattar said he would not speak on the budget when the House was not in order. However, he did make a speech later, saying an out-of-the-box solution was needed to redress the economic issues of the people.

He said conventional ways of making the budget would not serve the purpose. “Rather, we have to go for unconventional ways to provide relief to the masses,” he asserted. Sattar said the economic crisis was posing grave threats to democracy because the bad economic situation was compelling the people to think what democracy had given them.Textiles Minister Makhdoom Shahabuddin came down hard on the opposition by calling their attitude “regrettable” and against parliamentary norms and traditions. He said the conduct of the opposition had lowered the dignity of the House.

He hoped that the government would be able to bring inflation rate down to a single digit and commended the performance of his party’s government. BISP Chairperson Farzana Raja called the federal budget “good” in present circumstances and said the PPP had been endeavoring to fulfill all promise it made with the masses.She said the Benazir Income Support Progromme (BISP) was such a success story that some foreign governments had approached Pakistan to introduce the programme in their countries. Farzana said the government was also going to introduce another program under which thousands of people in North and South Waziristan Agencies would be sent to perform Haj on government expenses. – PT