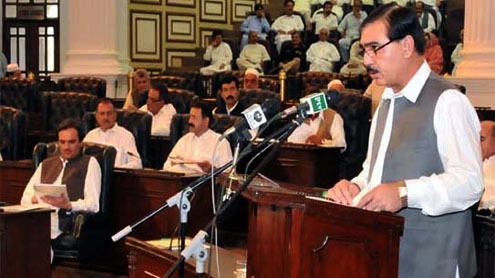 The minister in the budget speech he announced to increase salaries of government employees by 20 percent. He said that the government had allocated money for 940 development projects.He said a sum of Rs87 billion would be allocated for the annual development programme (ADP), adding that Seventy percent of ADP amount would be spent on the ongoing projects while the remaining would be spent on new projects.

He said that 296 new projects would be completed in next fiscal year.According to budget document, the current budget of the province has been increased by 29 percent in 2012-13 from year 2011-12 while the salary budget has increased at an alarming rate of 34 percent because of the intensified recruitment. Allocation of pension has shown an increase by 35 percent while the operational budget of the Government has increased by 27 percent, whereas, debt servicing has been reduced by 10 percent.

Government employees’ salary increase by 20 percent will also be announced. Reports said that a raise in the KPK share in PSDP and an increase in the electricity annual net profit will also be demanded from the federal government.Four percent of the Gross Domestic Product (GDP) will be spent on education, while scholarships for students who cannot attend school in Kohistan and Torghar will be introduced. – Onlinenews