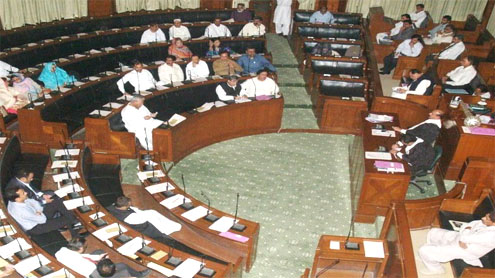 KARACHI: Talk on law and order situation across the province, particularly in Karachi, and complains of legislators about their problems dominated the discussion on provincial budget 2012-13 at the Sindh Assembly session, here on Tuesday.

Pakistan People’s Party (PPP) MPA Ahmed Ali Khan Pitafi said that they were helpless after the murder of Benazir Bhutto. He said killers of his son were wondering freely in the present government. He said the government, which couldn’t provide justice to its own MPA, would not be able to deliver justice to masses.Pittafi said his son was killed during previous tenure and he thought murderers would be arrested in ongoing PPP government but nothing happened. He further said people were being killed from Karachi to Kamoon but the writ of the PPP-led government was witnessed nowhere.

He said that hands of SSP Chaudhary Aslam’s hands were coloured with the blood of Rasool Bux Brohi, and he was appointed to conduct targeted operation in Lyari, but he killed innocent people and such mindset couldn’t do justice.PPP legislator also complained of negligence towards his constituency, where not a single development scheme was granted during the last four years. In response to his speech, various legislators expressed their concern over the law and order situation and stressed the need to control the situation on immediate basis.

Earlier MQM woman legislator Naheed Begum initiated the budget speech. She hailed the subsidiaries and incentives, given in budget for agriculture sector, however, she said that recovery of agriculture income tax was much low. She also hailed the decision of increasing women quota and said that the need of the hour was its implementation.

Sindh minister Sajid Jokhio also praised the budget and termed it beneficial for masses. He raised the point that nine lakhs votes of people of Sindh had been mentioned in lists of other provinces, which was a big injustice to the people of Sindh. He praised the role of MQM head Altaf Hussain for foiling the conspiracy of ‘Muhajir’ province. He also condemned targeted killing in the province and said that he had participated in 40 funereal prayers in a month at his constituency. He was of the view that provision of peace to the metropolis was their collective responsibility.

National People’s Party MPA Masroor Khan Jatoi praised the 11 percent increase in the budget and the importance given to education sector.MQM MPA Rauf Siddiqui praised the government for taking all allied parties on board and consulting with them for preparing the budget for the fiscal year 2012-13. He further said that maintaining law and order situation was crucial for economic and industrial development. “We would be stuck up with insurgency, if the issue of law and order was not resolved on war footing basis.

Earlier, while responding to the walkout of MQM, Rafiq Engineer of PPP said that innocent people of his constituency Lyari were being killed. “They go out of their areas for livelihood, but are abducted and killed.” He said that MQM was their partner and they equally feel their sorrow. He further said that target killings, extortion and crimes in the city were a part of conspiracy against the democracy, so all culprits should be dealt with the same stick.

Sindh Law Minister Ayaz Soomro while responding to point of order said that police contingent from Khyber Pakhtunkhwa and Balochistan would be deployed in the metropolis to ensure durable peace. He said that it was our joint responsibility to maintain peace in the city. He added that it was also a responsibility of allied parties to cooperate and coordinate with each other for the peace of the city.

He was of the view that MQM members should join hands with PPP against those deteriorating law and order in the metropolis and should join the treasury benches, instead of walkout. He further said that a number of terrorists had also been arrested. – Dailytimes