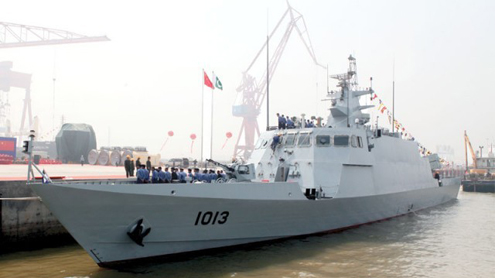 Joint Chiefs of Staff Committee (JCSC) Chairman General Khalid Shameem Wynne was the chief guest on the occasion. PNS Azmat is the first ship of its kind in the Pakistan Navy fleet. The craft has been designed and constructed by the China Shipbuilding and Offshore International Company (CSOC). The ship was commissioned as PNS Azmat in China on April 23. Speaking on the occasion, the chief guest said that Pakistan Navy’s multiple international deployments were a manifestation of its commitment to guarantee a safe and conducive maritime environment for the world.

He said that PNS Azmat was an embodiment of the persistent endeavours of Pakistan Navy to remain relevant to the contemporary environment through induction of state-of-the-art technology. Wynne said that indigenous capability of defence production had been the aim of Pakistan’s armed forces and the fast attack craft programme would contribute to achieve that target by constructing a second craft at the Karachi Shipyard and Engineering Works.

He lauded the defence cooperation between China and Pakistan, saying the longstanding ties between the two countries were a manifestation of an enduring, multidimensional and deep-rooted relationship. He hoped that defence collaboration between the two countries would grow in the times to come. Earlier, in his welcome address, Vice Admiral Zakaullah said that induction of PNS Azmat was a moment of pride for Pakistan in general and Pakistan Navy in particular. He apprised the audience that the ship was extremely agile and capable of undertaking multiple roles, adding that it was fitted with modern weapons and sensors and a variety of defence systems.

He added that the induction of the craft would provide operational flexibility to safeguard the country’s maritime interests effectively. Chief of the Naval Staff Admiral Muhammad Asif Sandila, a large number of navy officers and personnel of the China Shipbuilding and Offshore Company attended the ceremony. The chief guest handed over the ship scroll to the Pakistan fleet commander. He visited PNS Azmat and was introduced to the project team. With the induction of its first fast-attack craft, the Pakistan Navy has become the first force in the region to have this advanced defence capability. -Dailytimes