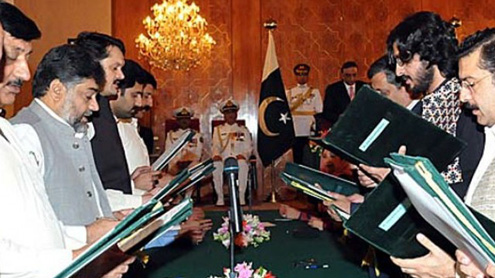 ISLAMABAD: Raja Pervaiz Ashraf, a member of the Pakistan People’s Party (PPP), was administered oath as the 23rd prime minister of the country at the Presidency on Friday.

Those who took oath as ministers of state are: Sardar Saleem Haider Khan, Muazzam Ali Jatoi, Malik Azmat Khan, Syed Samsam Ali Bukhari, Tasneem Ahmed Qureshi, Dr Nadeem Ahsan, Nawabzada Malik Amaad Khan, Abbas Khan Afridi, Chaudhry Imtiaz Safdar Warraich, Dost Muhammad Mazari and Raheela Baloch. Speaking at the oath-taking ceremony, Zardari said that the ultimate court was the court of the people and the ultimate verdict was pronounced by the history. He said that the people and the history would give their verdict sooner rather than later.-Dailynews